Veteran master of ceremonies Nick Sixkiller summed up the overall feeling of the crowd gathered for the 2022 Marcellus Norwest Memorial Veterans Powwow.

“It’s the first powwow here in three years and it’s going to feel good,” he said while announcing the first grand entry on Friday, July 8.

The powwow, which ran through Sunday, July 10, marked the first big public event to return to uyxat Powwow Grounds in Grand Ronde since the outbreak of the COVID-19 pandemic started in March 2020. Judging by the hundreds of attendees, it was a success.

“It’s actually really hard to put into words what this means to me,” Grand Ronde Tribal Council member Michael Cherry said. “I feel a sense of happiness and so much gratitude for being able to be together again and see the joy on peoples’ faces.”

The occasion also marked the first time Cherry participated in grand entry as a council member.

“As a youth who was Miss Grand Ronde, it felt like there was a lot of pressure on you,” Cherry said. “Being here with my fellow council members was such an honor, and to see so many faces in the crowd looking back at you, it is wonderful. … It’s been a very long two-plus years that felt like forever at times.”

Powwow weekend began with the Veterans Royalty Pageant held Friday morning at the Governance Center. The results were announced by Tribal Council member Jon A. George at a coronation event held at the powwow grounds just before that evening’s 7 p.m. grand entry.

“We appreciate all of the hard work the girls put into representing Grand Ronde,” George said.

After the coronation, grand entry began, as per tradition, with the Grand Ronde Honor Guard carrying in the colors and eagle staff, led by past Tribal Council chairman and Vietnam War-era Marine Corps veteran Reyn Leno. They were followed by veterans, Tribal Council members, Veterans Royalty and lastly all powwow dancers as they walked into the arbor to the beat of host drum Indian Hill.

Tribal member Bobby Mercier led a prayer in English and Chinuk Wawa and then veterans introduced themselves to the crowd.

Saturday attracted a larger number of people, with the arbor at the powwow grounds filling up as 1 p.m. grand entry began.

Grass dancer Jordan Warren (Karuk) said he’s attended a few powwows since the pandemic began, but this was the first West Coast one he’s participated in since 2019.

“It feels amazing,” Warren said. “It’s been more than two years for me and being able to reconnect with my powwow family is wonderful. I’m super excited.”

Hoffer said he was a bit nervous leading up to the introductions.

“I was anxious at first because I haven’t seen a lot of people since I transitioned (to a man),” he said. “What I enjoyed the most was standing under the arbor, hearing the sound of the drums, and the feel of the community together. … It’s good to be yourself. You’ll be a lot happier if you don’t let others’ opinions define you.”

Most of the powwow format was unchanged from past years, except for a few details. This year, organizers did not host an official Veterans Summit, which began in 2013 in an effort to connect veterans with their federal benefits. Due to consistently low attendance, organizers and volunteers encouraged informal group discussions.

However, there were a number of veterans’ organizations with informational booths, including Ramona Quenelle (Pit River), who serves as the Grand Ronde Tribe’s first veterans service officer. The Navy veteran usually dances at the powwow, but dedicated her time at this year’s event to helping veterans with whatever assistance they needed filling out benefits claims, making appointments or conducting interviews to determine what an individual veteran should receive in compensation for his or her military service.

“There were a lot, almost constant veterans/visitors coming to the table,” Quenelle said. “I feel that speaks to the success of the event. I was honored to be able to finally meet so many veterans, but I was proud that we as a Tribe are able to recognize them and their service.”

She added that 140 honor T-shirts were given out from Friday to Sunday, 41 veterans signed up to participate in a raffle and that 42 gift bags were given out between noon and 5 p.m. Saturday.

Additionally, meals were not served at this year’s powwow, but attendees could choose from a variety of onsite food vendor selections including the ever-popular fry bread and Indian tacos, lemonade, burgers, fries and hot dogs. 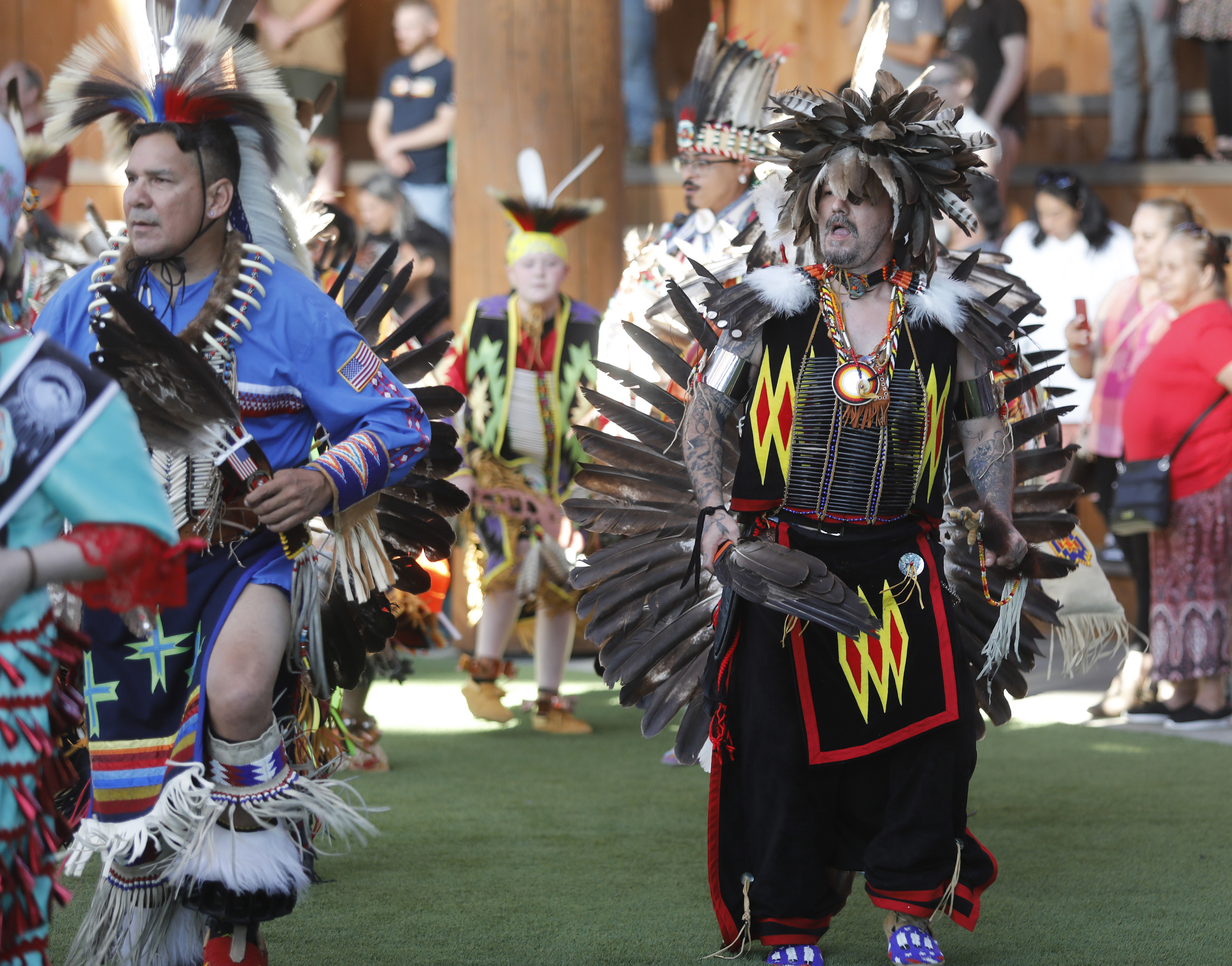 Fancy shawl dancer Dania Wahwasuck (Potawatomi) traveled from Nevada where she was visiting family to participate in the powwow.

“I’ve been dancing since I can remember,” she said. “When I was little, I grew up jingle dancing but fell in love with the fancy style when I was 12 and have done it ever since. It is very fast paced.”

The 21-year-old, who makes all of her own regalia and beadwork, is happy to be getting back to powwows after a long break during COVID.

“It’s such a beautiful location here and I have loved running into people I know and haven’t seen for a long time,” she said.

Vendors were happy for the opportunity to make sales to an in-person crowd again.

“During COVID, we were basically just helping other merchants survive by buying items from them,” he said. “A lot of Tribes didn’t get the initial COVID money so it was really tough on people. I feel blessed that we are having powwows again. It’s been a long time and when I pulled in here and saw everyone, I was like, ‘Yes!’ ”

Powwow concluded Sunday with a final grand entry at noon.