Spirit Mountain Community Fund celebrated 25 years of giving by awarding close to $800,000 in grants to nonprofits and Oregon Tribes.

Grants were awarded during a 25th anniversary dinner celebration held at Spirit Mountain Casino on Saturday, July 30, with approximately 200 attendees that included past and present Tribal Council members, Elders, Hatfield Fellows, Spirit Mountain Community Fund employees and board members, as well as representatives from various nonprofits and several Oregon Tribes.

“It’s great to see so many of you here tonight,” Community Fund Director Angela Sears said. “I’m honored, blessed and very thankful for our nonprofit partners. We’re here to recognize the contributions of those who came before us and the partnerships we have created over the years. Your leadership, vision, dedication and generosity has allowed us to create a positive change for the past 25 years.”

The Grand Ronde Color Guard brought in the flags followed by members of Veterans and Grand Ronde Royalty. Jon A. George gave the invocation and Reibach performed a flute song.

Tribal Council member Denise Harvey, who also serves on the Community Fund Board of Trustees, said the fund was dedicated to honoring Tribal traditions of sharing and giving back to the community.

“We’re approaching $90 million in giving and that’s amazing,” she said. 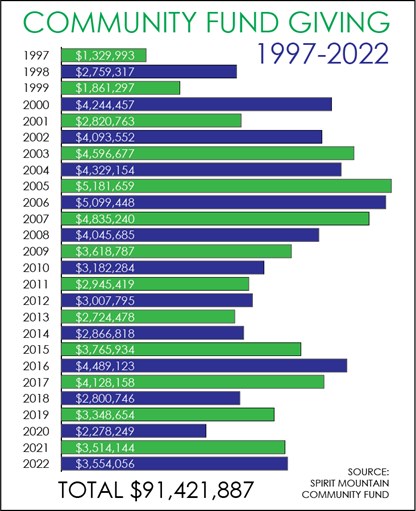 Additionally, past Community Fund directors were introduced. They are Shelley Sneed, Kathleen George, Blackwell and Cherry.

Royalty members performed “The Lord’s Prayer” and then Jon and Ty George drummed a food song.

Kennedy delivered the keynote address and emphasized that throughout the Tribe’s history it has always given back to the community, even in personally dire circumstances.

“I’m honored to stand before you and talk about the wonderful work the Confederated Tribes of Grand Ronde have done,” Kennedy said. “Our people have had so many struggles, but we have a rich culture. … Our principles of giving are grounded in our history, to look past any situation and I believe that is why we are successful today. I believe that guided by our principles and values is that we help one another. … Establishing the Spirit Mountain Community Fund was our way of giving back to the people who helped us.”

“What I recall is an extraordinarily challenging time,” Thomas said. “The Tribe had made the decision to pursue casino gaming and at the time there was nothing like it in the state of Oregon. Most Tribes who had established casinos elsewhere hired professional gaming companies and paid them a large amount of money. The proposals we got were not very good so we made the decision to try to do it ourselves.”

Thomas said that the group had the skills but not the business experience, plus most of them were in their 30s or younger.

“We had to go and find someone to lend us $45 million so we could get the casino built,” he said. “We were able to pull it off and get financing and 10 months after the conversation with John Hancock in Chicago, we were the first major casino in the state (in October 1995).”

Facing intense criticism and threats of corporate taxation, the casino decided to partner with the community and launched the Community Fund in 1997, where 6 percent of all casino proceeds are allocated to local nonprofits.

“It wasn’t a hard decision to offer the Community Fund,” Thomas said. “We were fortunate to have kind, fair people involved in that process. … The message here is really about how much normal people can accomplish when they work well together.”

Lazenby reflected on his years of service as a trustee.

“The past 15 years on this board have been some of the richest and most rewarding of my life,” he said. “The real value of the fund is doing the quiet good things, and making things better for the community, people and Tribe.”

After dinner concluded, 10 celebration grants for $5,000 each were announced by individual board members and Community Fund employees to recognize organizations providing “exceptional support and services in their communities.”

Lastly, seven Tribal grants in the amount of $100,000 each were awarded to:

The 25th Anniversary Celebration concluded with Ty George and Quenelle drumming as the flags were retired by the Color Guard.