As a child, Tribal member Joseph Ham recalls hearing his mother tell a tragic family story that had been passed down through the generations: A 6-year-old uncle of his great-grandmother, Ila Dowd, was lynched in Jacksonville, Ore., at the onset of the final Rogue River War in the fall of 1855.

At the time, Ham, 29, thought it was family lore and not quite believable. But time and perspective often have a way of imparting lessons.

“When I was researching the Lupton massacre I found an old article of the event depicting what she had told my mom and I kept thinking about how he has been eternally 6 years old this whole time,” Ham says. “And I was mad at myself for not wanting to believe that story growing up, like a part of me only put stock into it after I read it in a book. I think that must be part of the decolonization process.”

He put his thoughts into song and performed it in 2020 to accompany a photography exhibit called “The Land Remembers” by Rich Bergeman. The exhibit was a series of black-and-white photographs depicting the Rogue River War battle sites.

Ham wrote the song after representatives from the Chehalem Cultural Center asked Tribal Cultural Resources Department Manager David Harrelson if he knew of a descendant of the war who could add an element of Indigenous representation to the photo exhibit.

Harrelson contacted Ham again when he learned of a poetry contest, Signs of Spring at Table Rocks, sponsored by The Nature Conservancy and Bureau of Land Management. Winning entries would be displayed along the Table Rocks hiking trail in southern Oregon in conjunction with information on geology, wildflowers, pollinators and other subjects associated with the area.

The subject of the contest, “What do the Table Rocks mean to you?” was especially poignant to Ham given that his great-great uncle was murdered in a Takelma village nearby after the Natives fled Table Rocks for their former home due to hunger, cold and disease.

Given time constraints for the entry, Ham chose to rework the song he had written to honor his uncle and other Takelma people who were killed.

When Ham composed the piece last year, he lived in Medford and was able to visit Table Rocks frequently during the writing process.

“It was written over a period of about a month,” he says. “I would go up to Table Rocks and ask if I was doing this OK. I think a big part of my thought process during it was oral history. (Rewriting) it brought me back to how it felt seeing Table Rocks every day. Down there I learned that the red-tailed hawk mascot of Southern Oregon University was inspired by a Takelma story of how Table Rocks was formed.”

When Ham found out his poem had been selected, he recalls it felt good looking at his finished work and remembering the original song.

“I remember, like everyone, my life was making a lot of really good strides pre-pandemic. I remember thinking, ‘Everything’s coming up Joseph!’ Then the world ended. I felt like I lost my own private battle having to come home from the Rogue Valley, just like my ancestors did. But my life has so much depth and love right now, that it reminded me that they were the ones that made Grand Ronde a home for me in the first place when they had to say goodbye to theirs. I could come home to Table Rocks for them, but our ancestors sacrificed to make Grand Ronde our home.”

Ham currently works as a temporary accounting clerk for the Tribe and hopes to join the Cultural Resources Department in the future. He says he felt it was important to share his reflections on Table Rocks with others so that its original inhabitants would be remembered.

“I find it really important because growing up in and around the Grand Ronde community, it made me realize that so much of western Oregon Indigenous culture had been compressed into this little community,” he says. “For tiny communities like Siletz and Grand Ronde and others, it is crazy to think we hold and represent all this tradition of half the state.” 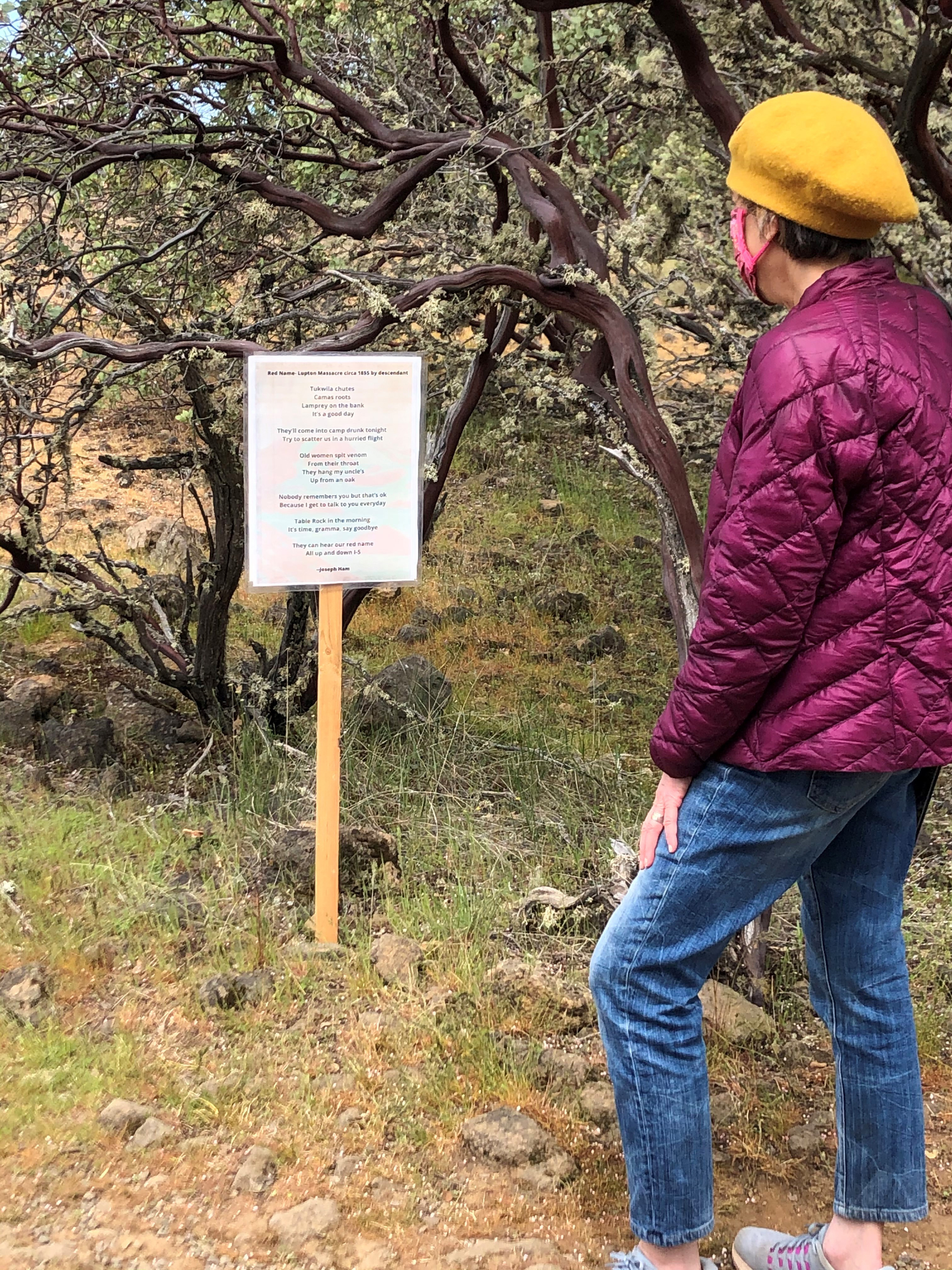 Molly Morison, The Nature Conservancy’s Oregon Preserves manager, said that poetry is another form of storytelling that offers deep connections to people’s hearts and minds.

“Maybe it is the rhythm, imagery, the succinct thoughts – I’m not sure,” she says. “But Joseph’s poem encapsulating the Takelma people and descendants’ past and present relationship with the Table Rocks, and all the emotion within it, has stayed with me since I first read it.”

The Nature Conservancy and the Bureau of Land Management have organized public spring hikes at Table Rocks for 35 years. The number of hikes and diversity of topics have increased over time to include many aspects of nature and culture including the arts. Hikes are led by volunteers and have included representatives from the Grand Ronde, Siletz and Cow Creek Tribes, as well as BLM and Nature Conservancy staff members who are knowledgeable about the topics.

“And we have a great team of creative volunteers who help organize and run the series,” she says. “One of my star volunteers, Kathy Kudo, came up with the idea for poetry-themed hikes a few years ago. We reached out to the Oregon Poetry Association for poets to lead hikes where people could read poems and write some too along the way.”

Although the in-person guided hikes were canceled again this year due to the pandemic, Morison and others didn’t want people to miss the opportunity to learn something about the Table Rocks while they walked. The “Signs of Spring” project emerged as a new self-guided experience for the trails.

“This year, in honor of National Poetry Month in April, we put out a call to local poets for submissions related to the Table Rocks and nature with the idea that we could place the poems along the trails to inspire reflection and learning,” Morison says. “We wanted to make sure Indigenous voices were included.”

She sent an announcement to Dr. Brook Colley, chair of the Native American Studies Program at Southern Oregon University, in the hopes that some of her students might participate. In turn, the announcement was forwarded to both the Grand Ronde and Siletz Tribes.

“And then Joseph e-mailed his wonderful poem to me,” Morison says.

Ham’s poem was displayed throughout April. He says considering some of the derogatory names that still exist for southern Oregon Indigenous landmarks, this one is a win as far as representation goes.

“The eradication of us as a people is still imprinted into the consciousness down there,” he says. “But that’s changing, people are looking for a way home through us and that is a good thing. … I also have a lot of gratitude to The Nature Conservancy for purchasing so much of the area in the 1970s to save Table Rocks from overdevelopment.”

The cooler side of things