Remember the past, focus on the present and plan for the future was the message of the three-day Gathering of Grand Ronde Tilixam held Tuesday, May 21, through Thursday, May 23.

In its second year, the event sought to give participants an opportunity to connect and learn how to best care for the community by discussing historical and intergenerational trauma, wisdom, culture, identity, healing and more.

The Tribe’s Social Services Department spearheaded the efforts behind the event, assisted by the Cultural Resources Department and facilitated by the Native Wellness Institute of Gresham.

“Our focus here is on uplifting each other so we can keep uplifting our people,” said Native Wellness Institute Executive Director and event co-facilitator Jillene Joseph.

Other event facilitators were Shalene Joseph and Josh Cocker, who also lead the Indigenous 20-Something Project.

The institute’s mission is to promote the physical, mental, emotional and spiritual health of North America’s indigenous peoples, and to bring about positive changes. It has existed for 19 years and organizers have facilitated hundreds of community healing gatherings throughout North America using the Gathering of Native Americans curriculum.

The curriculum was developed between 1990 and ’94 by several founding institute members. Organizers say it has stood the test of time as an effective healing and planning model for Tribal communities addressing effects of historical and intergenerational trauma. 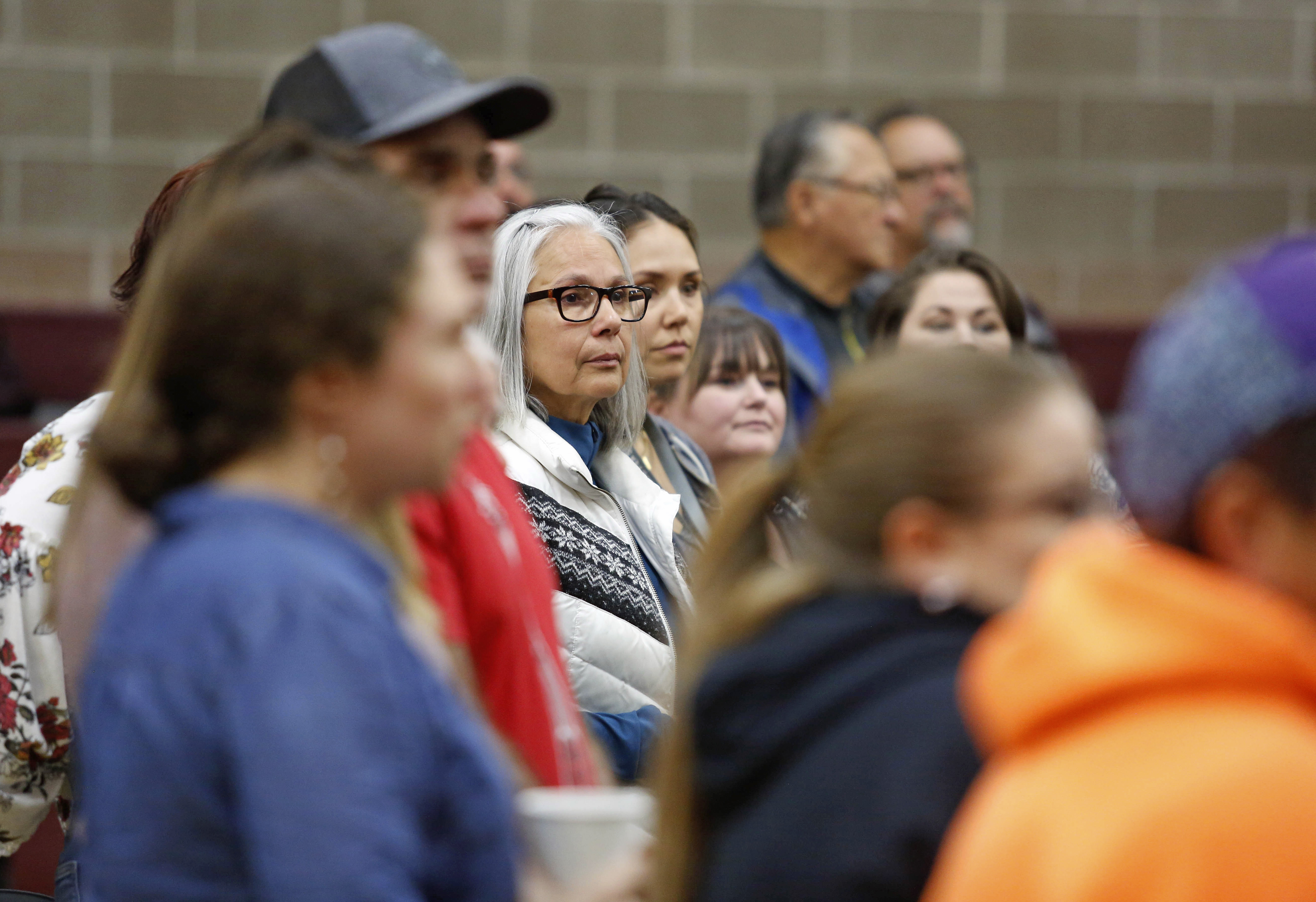 Vocational Rehabilitation Caseworker Carmen Mercier, center, joins other Tribal members on the first day of the second annual Gathering of Grand Ronde Tilixam held in the Tribal gym on Tuesday, May. 21. The event was to bring the community together for healing, to learn from the historical trauma that continues to affect the community and to learn new skills to help restore balance.

Historically, the Grand Ronde Tribe has faced considerable obstacles: Being removed from its homelands to a Reservation, discouraged and sometimes legally required to abstain from traditional practices and lifestyles, Termination in 1954 and the subsequent relocation of many Tribal families away from Grand Ronde.

After years of hard work and perseverance, the Tribe was restored in 1983 and has subsequently flourished, albeit with its share of struggles and growing pains.

“Tilixam” means “people, family or gathering” in Chinuk Wawa. Evidence of that could be found in historical photos that lined the walls of the Tribal gym. These included pre-Reservation, early Reservation and current images depicting everyday scenes of work, home, school, cultural activities, sports, military service and social gatherings, as well as solemn portraits of Tribal chiefs and Elders.

“We are going to talk about things from the past, what is currently happening and our hope for the future,” Jillene Joseph said on the first day.

The Chinuk Immersion Preschool class performed the Canoe Song, assisted by their teachers. Jillene Joseph then invited the adults to do “healthy risk taking” and join the children in the Blue Heron Song, which involved flapping their arms like birds, squawking and dancing. Most of the audience participated.

“This is so much fun,” Tribal member Monty Herron said.

Joseph said that teachers can be any age.

“This is their norm,” she said of the children who danced. “Many of us didn’t grow up with this, but it’s never too late to learn. At another gathering, a 70-year-old Elder said it was the first time in her life she did something ‘Indian.’ For the next three days, we will be doing it whenever we can.”

Attendees all had their photos taken, which were then pasted on to affirmation sheets on the gym walls.

“It’s a reminder of our time gathered here and how awesome you are,” Jillene Joseph told the audience of approximately 65 community and staff members who attended.

The morning also included small and large group activities, such as breaking into “clans,” doing ice-breakers such as speaking for 30 seconds on different topics, and sharing expectations for the day.

Afternoon activities included storytelling, understanding family charts and doing a “river of life,” which involved watching a video about Willamette Falls and its importance to the Tribe. Participants then considered major events in their lives from birth to the present, and marked these in a “river of life” drawing activity. 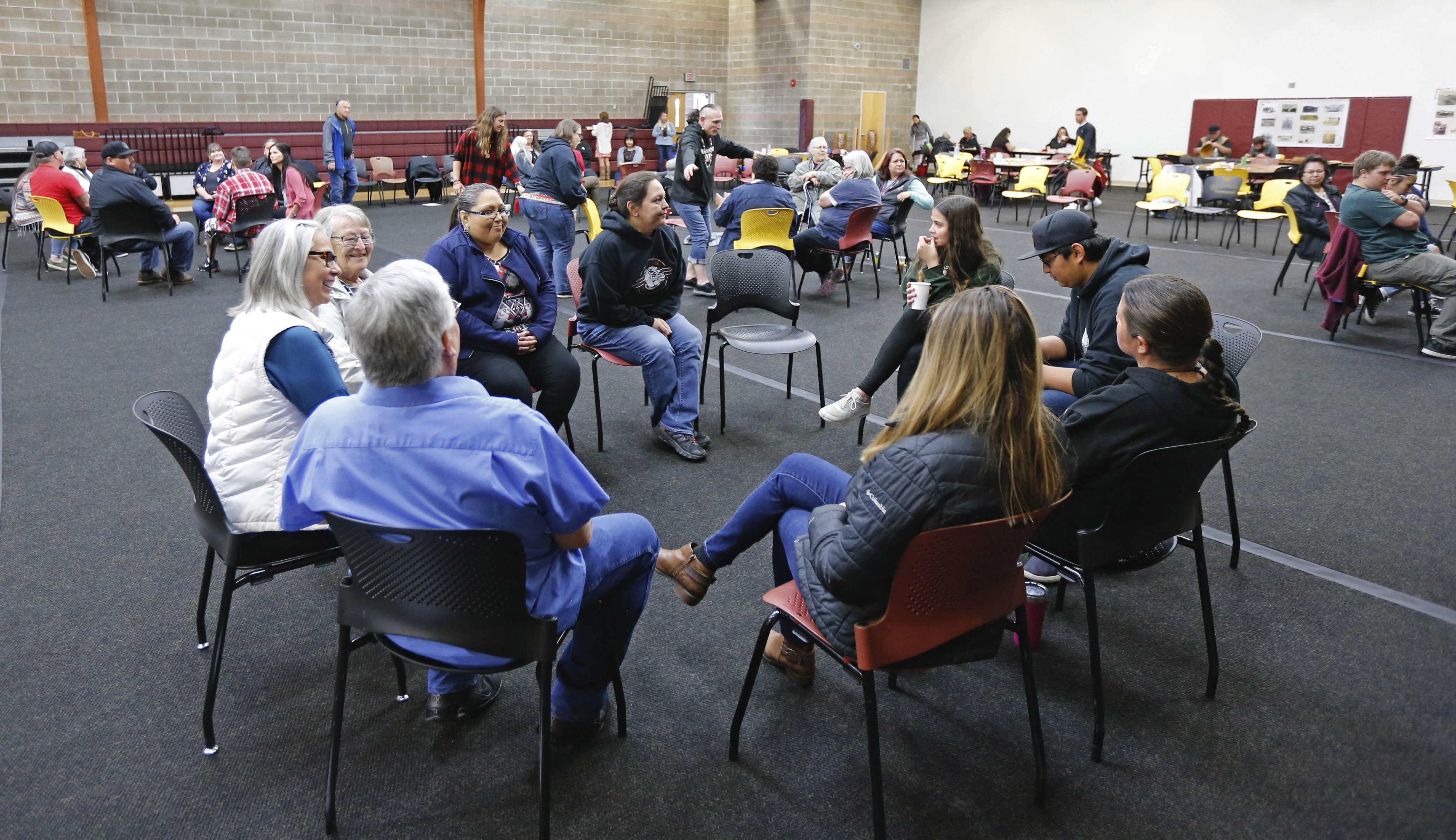 Tribal members break off into small groups on the first day of the second annual Gathering of Grand Ronde Tilixam held in the Tribal gym on Tuesday, May. 21.

The second day began by reflecting on the previous day’s activities and what was most meaningful to individual attendees. They were joined by key Restoration figure and Tribal Elder Kathryn Harrison, who is 95 years old.

“I wasn’t here yesterday, but my impression so far today is one of togetherness,” she said. “Everyone opened their arms to me. I’m thankful I am here for one more day.”

“The rapids in the rivers were similar in how they affected us, whether we were 18 or 64,” she said. “Trauma was profound and the pain was all the same.”

“We should get more of our Tribal people involved,” she said.

Other speakers mentioned highlights of spending time with Elders, bonding in their clan groups, meeting new people and learning about Restoration.

“I’ve heard the word ‘healing’ a lot today,” Jillene Joseph said. “You didn’t hear that word very much several years ago. This is a sign that our norms are starting to change, and that’s a good thing.” 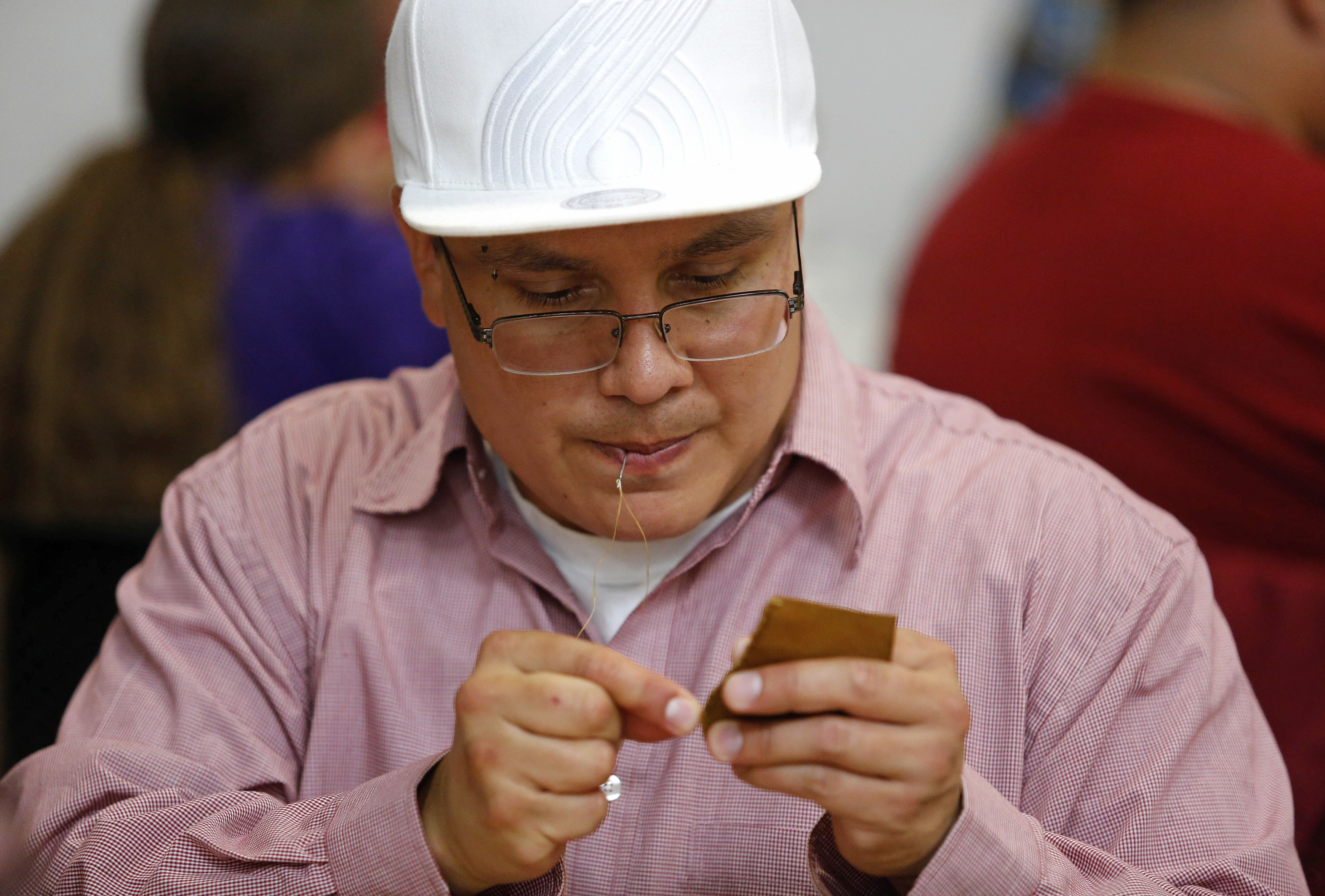 Tribal member Acey Runningbird works on making a medicine bag on the second day of the second Gathering of Grand Ronde Tilixam held in the Tribal Gym on Wednesday, May 22.

Other activities on Wednesday included exercises on closure and transition, multigenerational trauma and cultural oppression, and historical wisdom and resiliency. In the afternoon, attendees participated or watched crafting activities, such as beading, carving and making medicine bags and maple bark skirts. Others visited Chachalu Museum & Cultural Center.

On the final day, the event focused on giving back to the community and included sharing plans, community resources, presentation of completion certificates and giveaways.

“I’ve really enjoyed being here for the second year in a row and hearing everyone’s stories,” Portland Area Office Tribal Services Representative Lisa Archuleta said. “Sometimes we come to these trainings and as soon as we leave, that goes away. I would encourage those who are struggling to reach out.”