After colonialization, Two Spirit people were often viewed as “sinful” by white settlers and missionaries, and subjected to violence. As a result, their traditions and practices were conducted in secret or completely disappeared in many Tribes.

Grand Ronde Tribal member Silas Hoffer is among them. He was recently crowned Mr. Montana Two Spirit at the 25th annual Montana Two Spirit Gathering at Flathead Lake Methodist Camp. Nationally, these gatherings have been held since the early 1990s and regional gatherings are held in several parts of the United States.

“Although I wish to remain humble in my title, I think it is important to acknowledge this beautiful gathering and start opening dialogues around how the Grand Ronde Tribe honored its Two Spirit/LGBTQ relatives before colonialization,” he says. “I will gladly do my duties as Mr. Montana Two Spirit and raise awareness about our wonderful identities in as many ways as possible.”

Hoffer, 28, was born a female, but has transitioned into a male. On a sunny Friday morning at Café Zamora in Portland, he sat down and discussed the journey, his Mr. Montana sash and medallion proudly displayed.

“I’m excited to bring this out into the open,” he says. “I think it seems like lots of people feel that they have to hide who they really are because of fear of judgment.”

Hoffer is the youngest of four children, all Grand Ronde Tribal members. He attended Willamina High School and was employed at Spirit Mountain Casino, but says he never felt like he was really a part of the community.

“I know a few people from when I was growing up in Grand Ronde that won’t bring their partners with them if they go home or attend events because they are afraid of being turned away,” he says. “I think it has a lot to do with the boarding school era and colonialization. There were a lot of attacks on Two Spirit people so we were forced to assimilate and forced to forget who we were. … Christianity has a lot of influence as well and so Two Spirit is a topic that is hush-hush.”

Although there were variations in their roles in Tribes across North America before colonialization, Two Spirits shared some common traits. These included specialized work roles, gender variation, spiritual leadership and same-sex relations. Among the Lakota, Mohave, Crow, Cheyenne and others, Two Spirit people were believed to be lucky in love and able to bring this luck to others.

When he was growing up in rural communities, Hoffer says he was unaware that transgender people existed and didn’t truly accept his own identity until he was in his mid-20s and living in a more urban environment.

“In high school, there was a person I knew who was trans and she told the wrong person and ended up having to fight,” he says. “I remember this other kid who was openly gay and he was harassed so much he ended up using meth. It was really confusing growing up because there was no teaching about transgender or being gay in our sex ed classes. You had to dress a certain way and act a certain way.”

Hoffer says he wasn’t planning to compete for the Mr. Montana title, but was convinced by an auntie to do so.

“I don’t see myself as a spotlight kind of person,” he says. “I didn’t have anything planned, but was going to the gathering anyway so decided to go for it.”

Hoffer performed a hand drum song based on a Chinookan stick game and also did a lip sync piece to Beyoncé’s “Listen.”

The duties of Mr. Montana are to represent the Two Spirit community as much as possible. Hoffer plans to do this by attending various powwows and also by living authentically, which means not hiding his true self. He says his family has struggled to understand the changes, but are coming to terms with it in their own time.

“I want all the Two Spirit LGBTQ Tribal people to know the hardest part is coming out, but there is always a family for them,” Hoffer says. “We often have to create our own, but that can be one of the most rewarding gifts in our life. Living your truth openly and loving yourself is the first thing we can and should do to honor our Two Spirit ancestors. But being openly Two Spirit is on your own terms. We will be waiting for you when you're ready.”

“What word did we use in our Tribal languages that was equivalent to Two Spirit, what is its direct translation and how were we seen in the Tribe? How can we ensure the safety of our Two Spirit people? How can we create acceptance?”

Two years ago, Smoke Signals featured another famous Two​ Spirit Tribal member, Anthony Hudson, who confronted complacency and the confusion of mixed identities both sexually and racially by channeling those feelings into a full-length play.

Hudson, 35, is a multidisciplinary artist, writer, performer and filmmaker who lives in Portland and dresses as drag clown Carla Rossi, his alter ego. Rossi has evolved over the years into Portland’s premier drag clown hosting nightlife events that include everything from neighborhood gentrification tours to queer horror film screening nights, always with a smattering of humor.

Although the COVID-19 pandemic shuttered live theater for some time, it is finally making a comeback. Recently, Hudson performed as Rossi for a Saturday night show at Stanford University’s Bing Concert Hall.

“Carla Rossi is my way of confronting whiteness within myself,” Hudson says. “She’s the intersection of my half-Native, half-German mixed heritage. … As a queer performer, Carla is also an avenue for publicly and politically negotiating gender in a heterosexist binary.” 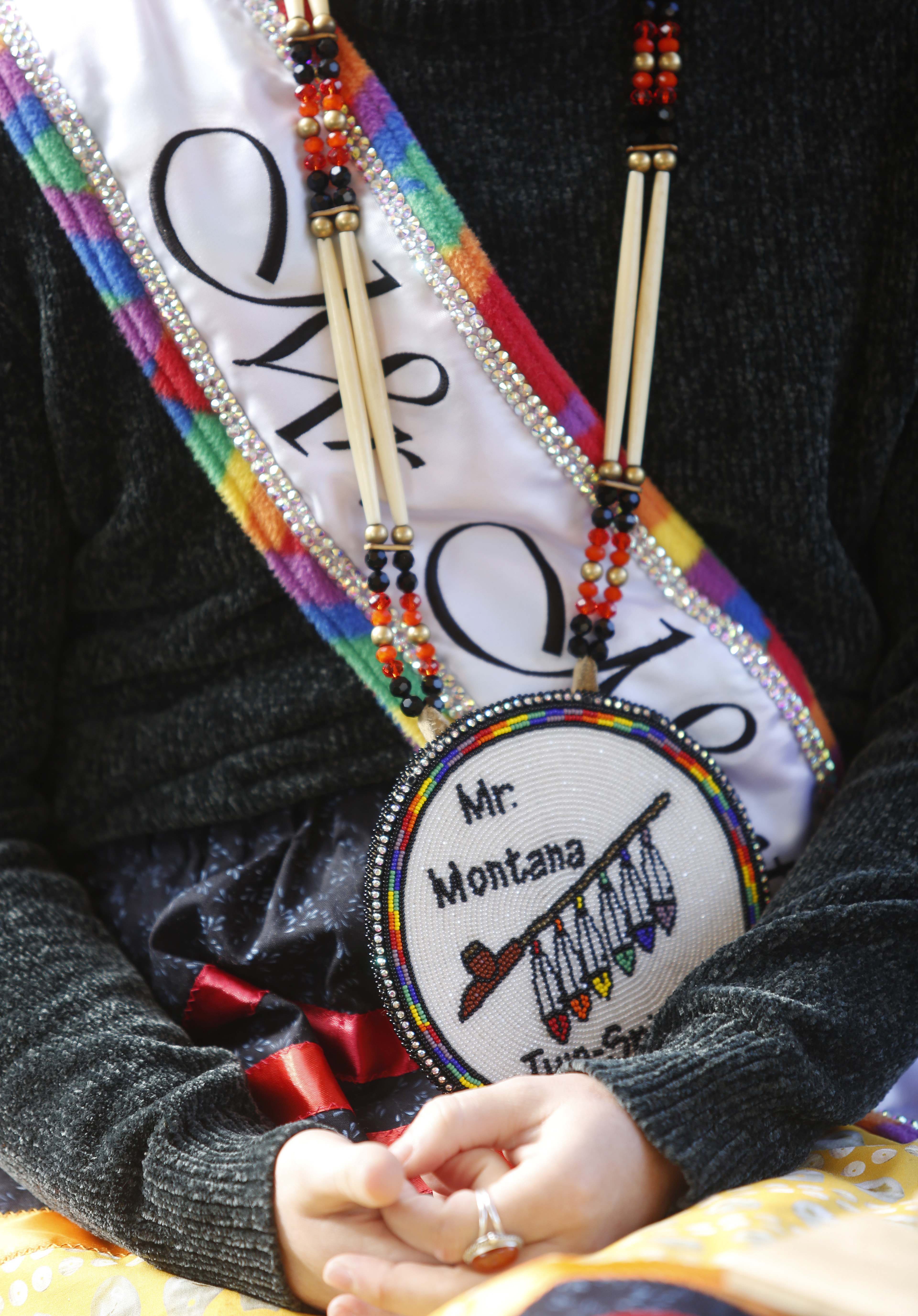 Tribal member Silas Hoffer wears the sash and medallion he won after being named Mr. Montana Two Spirit on Friday, Nov. 5, outside of Café Zamora in Portland. (Photo by Timothy J. Gonzalez)