WOOD VILLAGE – The Confederated Tribes of Grand Ronde, in reaction to the Siletz Tribe’s proposal to build a casino in north Salem, is reassessing the former Multnomah Greyhound Park property in Wood Village for construction of a gaming facility.

The general membership was informed of the Tribe’s plan during the Sunday, Oct. 4, General Council meeting.

“For our Tribe to be prepared, we are looking at putting the Wood Village property into trust for the purposes of gaming,” Tribal Council Chairwoman Cheryle A. Kennedy said on Wednesday, Sept. 30, with the provision that the information remain embargoed until after the General Council meeting. 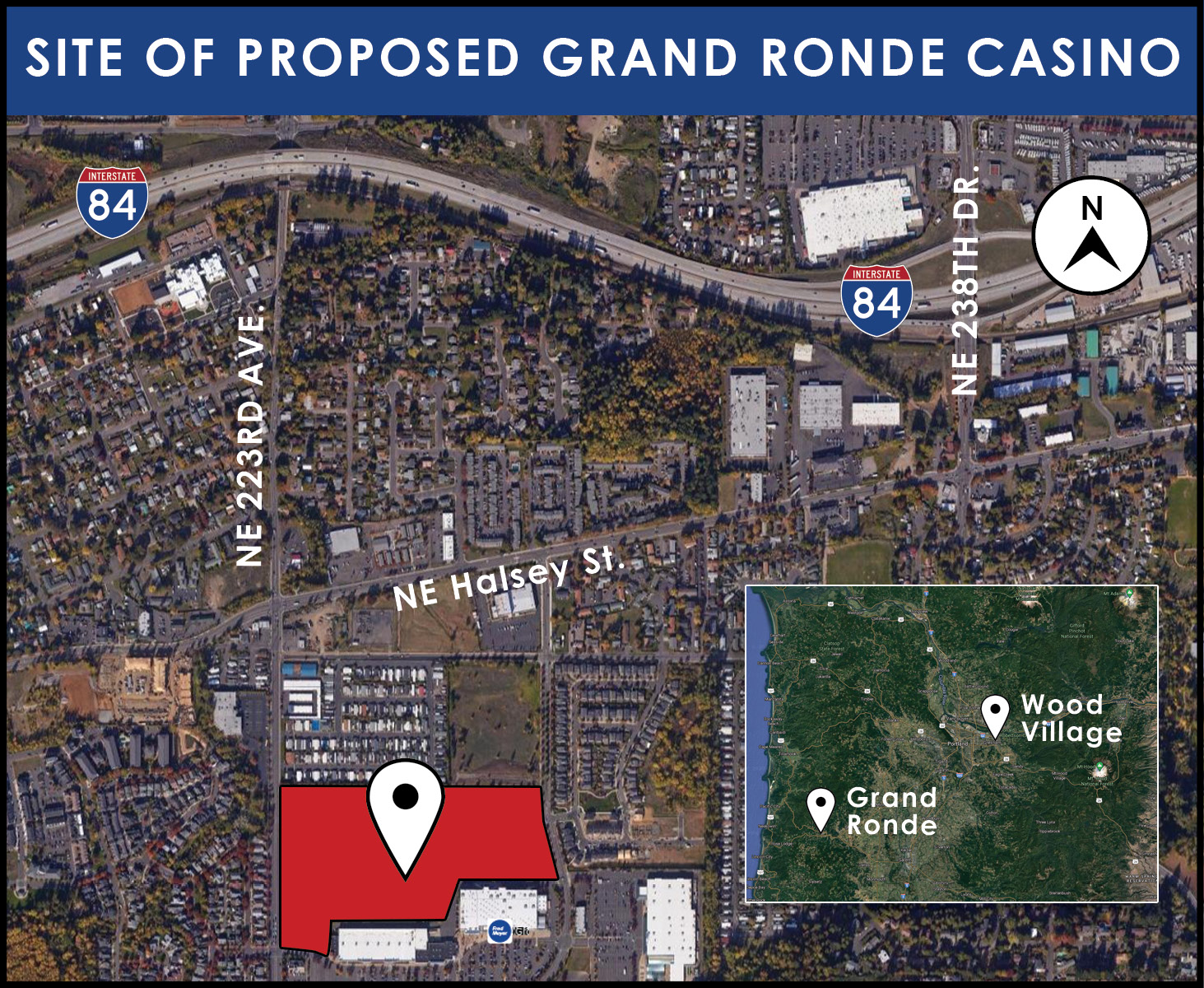 The Tribe purchased the former racetrack in east Multnomah County in December 2015 for $10 million after it had been proposed twice as the possible site of Oregon’s first privately owned casino. Voters rejected the idea of a privately owned casino in the state in 2010 and 2012. The Tribe announced in August 2018 that it intended not to develop the property, but instead put it on the market with the hopes of making a hefty profit after having cleared the site.

In the interim, the Tribe sold 4.6 acres of the 31.5-acre site that included undevelopable wetlands to the city of Wood Village for use as a public park. More than 26.5 acres are still owned by the Tribe.

Fortunately, it appears, the Tribe could not find a buyer and then the Siletz Tribe, which operates Chinook Winds in Lincoln City, filed an application on April 30 of this year with the Department of the Interior’s Office of Indian Gaming to build an 180,800-square-foot casino just north of downtown Salem. The Grand Ronde Tribe subsequently took the Wood Village property off the market on July 10.

With the April 2017 opening of Ilani, the Cowlitz Tribe’s casino off Interstate 5 about 17 miles north of the Portland-Vancouver metropolitan area, Salem has become an even more important market for Spirit Mountain Casino. If the Grand Ronde Tribe is successful in siting a casino in Wood Village, it would once again operate the closest gaming facility to the Portland metro area, just as it did for 22 years before Ilani’s opening.

Kennedy said the Grand Ronde Tribal Council and Siletz Tribal Council held three teleconference meetings regarding the Salem casino proposal, trying to create a plan that both Tribes could agree on.

“We had a couple of proposals that did not go anywhere,” she said. “At the end of the day, the writing was on the wall. We need to do what it takes to protect our people because the needs are great, as are theirs. We needed to develop a strategy on maintaining our revenues.”

The Siletz property located on 20 acres at the Portland Road Northeast exit east of Interstate 5 is already held in trust by the federal government.

The Grand Ronde Tribe will have to start the process of getting the Wood Village property taken into trust and applying to the Department of the Interior for permission to build a casino, a process that could take “multiple years,” Kennedy said.

Tribal Council Chief of Staff Stacia Hernandez said the Tribe will apply for the Interior Department decision at the same time it applies to take the land into trust.

“Our staff is working diligently to put the land into trust,” Kennedy said while announcing the effort to the membership.

Hernandez added that the 2021 Tribal budget, which will be unveiled to the membership in November, will include funding for studies and casino planning.

The two Tribal casino proposals, if approved, will end the longstanding Oregon policy toward Native American gaming – one casino per Tribe on Tribal lands.

The Grand Ronde Tribe has not talked with Gov. Kate Brown about the proposal and contacted Wood Village city officials the week of Sept. 28-Oct. 2 to broach the casino concept.

Brown was noncommittal in a letter to Bureau of Indian Affairs Northwest Regional Director Bryan Mercier regarding the Siletz casino proposal. She said that the Indian Gaming Regulatory Act gives the governor an opportunity to concur or not with a determination.

Despite the potentially contentious competing casino proposals, Hernandez said the Grand Ronde and Siletz Tribes are successfully compartmentalizing their work on other projects, such as developing the 15.7-acre Chemawa Station in Keizer that the two Tribes have jointly owned since 2002 and repealing the consent decree.

As for the future of Spirit Mountain Casino, which the Grand Ronde Tribe opened in October 1995, Kennedy said it will likely continue to operate in some form even if the Tribe opens a gaming facility in Wood Village.

“This is uncharted territory for gaming in Oregon,” Kennedy said. “We don’t know what the effects could be.”

Proposed Cascade Locks casino site back on the market