PORTLAND – The Affiliated Tribes of Northwest Indians’ Winter Convention continues to be a well-attended event and the Grand Ronde Tribe was prominently represented in several different areas.

The annual event, held Sunday, Jan. 26, through Thursday, Jan. 30, at the DoubleTree Hilton is an opportunity for meetings, discussion, presentations and committee work that affects policy, legislation and the future of Indian Country in the Pacific Northwest.

Grand Ronde Tribal Council Chairwoman Cheryle A. Kennedy led the invocation, asking for a blessing upon ATNI staff, Tribal leaders and the city of Portland.

“Everyone has come together to enjoy each other’s company and share information,” Kennedy said. “It’s good to be here. … What you see today in Portland was not here 150 years ago. It was a wetland. We have all the dams on the Columbia River to keep the flooding at bay. Not far from here on the Tualatin River, the restoration of wapato is going on. It makes me feel good.” 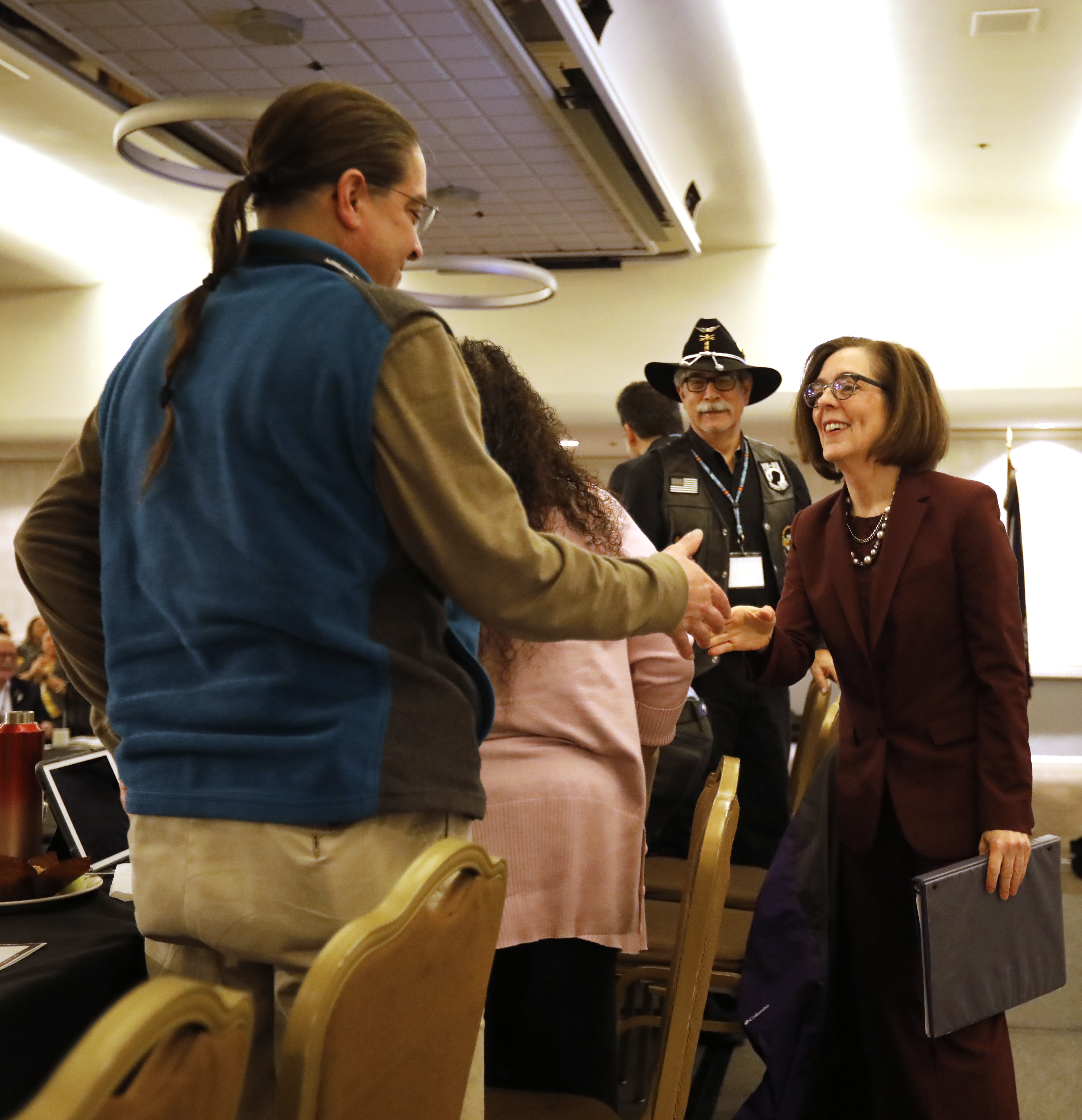 Gov. Kate Brown shakes hands with ATNI board members after she finished making remarks on the first day of the annual Affiliated Tribes of Northwest Indians Winter Convention held at the Doubletree Lloyd Center Hotel in Portland on Monday, Jan 27. (Photo by Timothy J.Gonzalez/Smoke Signals)

“It is truly an honor to welcome you to Oregon,” Brown said. “When two Tribal chairs come up to you and ask you to speak at a meeting, you do it. It’s a unique and challenging time to govern, and it’s important that we all work together.”

Brown highlighted her years serving on the Legislative Commission for Indian Services, established 45 years ago by the state of Oregon as a means of creating a government-to-government relationship between the state and its nine federally recognized Tribes.

“We’ve been able to make progress on a number of issues and have ongoing consultations between Tribes and the state of Oregon,” Brown said. “The two things I am most proud of doing while serving on the commission are eliminating the ‘S’ word from geographic names and working to allow Tribal Elders to teach Native languages in schools. We must not lose any of our Native languages.”

Brown also touched on the importance of participating in the upcoming 2020 Census, as well as passage of House Bill 2625, which she signed into law last spring. It directs Oregon State Police to study how to increase and improve criminal justice resources regarding missing and murdered Native American women in Oregon and report the findings to a legislative committee no later than Sept. 15, 2020.

“It’s a part of our ongoing efforts in Oregon to increase resources,” she said. “We know we have jurisdictional issues, lack of proper data collection and lack of trauma-informed care.”

ATNI Executive President Leonard Forsman (Suquamish) told attendees that the increasing amount of political division in the country can also serve as an opportunity for Tribes to work together to accomplish common objectives, such as natural resource protection and long-term economic diversity.

“Many Tribal leaders know how important that is,” he said. “Sometimes it feels like we are all alone in that. But we have an obligation to protect future generations. There are a lot of people who want a clean environment, but they also want jobs. We need to find ways to have a robust economy, but not be greedy and think short-term.”

A report on missing and murdered indigenous women, and efforts to address the issue at the federal level was given by Mark Cruz (Klamath), who serves as deputy assistant secretary in the Department of Indian Affairs for policy and economic development. He was appointed by the Assistant Secretary for Indian Affairs Tara Sweeney in September 2018.

“We are often dealing with vexing issues of policy and law,” Cruz said. “Increasingly, public safety is an evolving issue and we need to ensure the well-being of everyone in Indian Country, especially our missing and murdered women.”

In August, the Department of the Interior launched a series of work sessions in Indigenous communities across the United States called “Reclaiming Our Native Communities.” This resulted in a Nov. 26 proclamation that established a Department of the Interior and Department of Justice joint task force nicknamed “"Operation Lady Justice.” Its intent is to work with Tribal leaders to develop new protocols on how to handle cases of missing and murdered women in Indian Country, re-examine data gaps and create a “cold case” team to look into unsolved cases.

“Assistant Secretary Sweeney wanted me to convey that all of these sessions helped her to understand the critical need for secure holding facilities on Tribal lands and more trauma-informed training,” Cruz said.

“It’s my fourth year at ATNI and I look forward to continuing to cultivate meaningful government-to-government relationships,” he said. “It is critical for our mutual success. Our city can serve as a valuable ally to Native communities, and we can never forget the adverse policies that impacted Native peoples, and we must work to reverse those.”

In November 2019, the city hosted its second annual Tribal Nations Summit. The event date was chosen in conjunction with November being Native American Heritage Month. Leaders from seven Northwest Tribes, including Grand Ronde, attended the two-day summit, along with hundreds of city employees.

“Our Tribal work is widespread and we are deeply committed to this work,” Wheeler said. “And we back our words with actions.”

Bureau of Indian Affairs Regional Director and Grand Ronde Tribal member Bryan Mercier gave a brief presentation about what has happened since he was appointed to the position in late 2018.

This summer, he is hoping to expand BIA services by opening a Vancouver, Wash., office.

“I’ve been losing people because of the commute to Portland,” he said. “To recruit and retain people, and offer services to those who live in the Vancouver area, I need an office there.”

“Our forestry program is one of the largest in the country and we are very active in fire management,” he said. 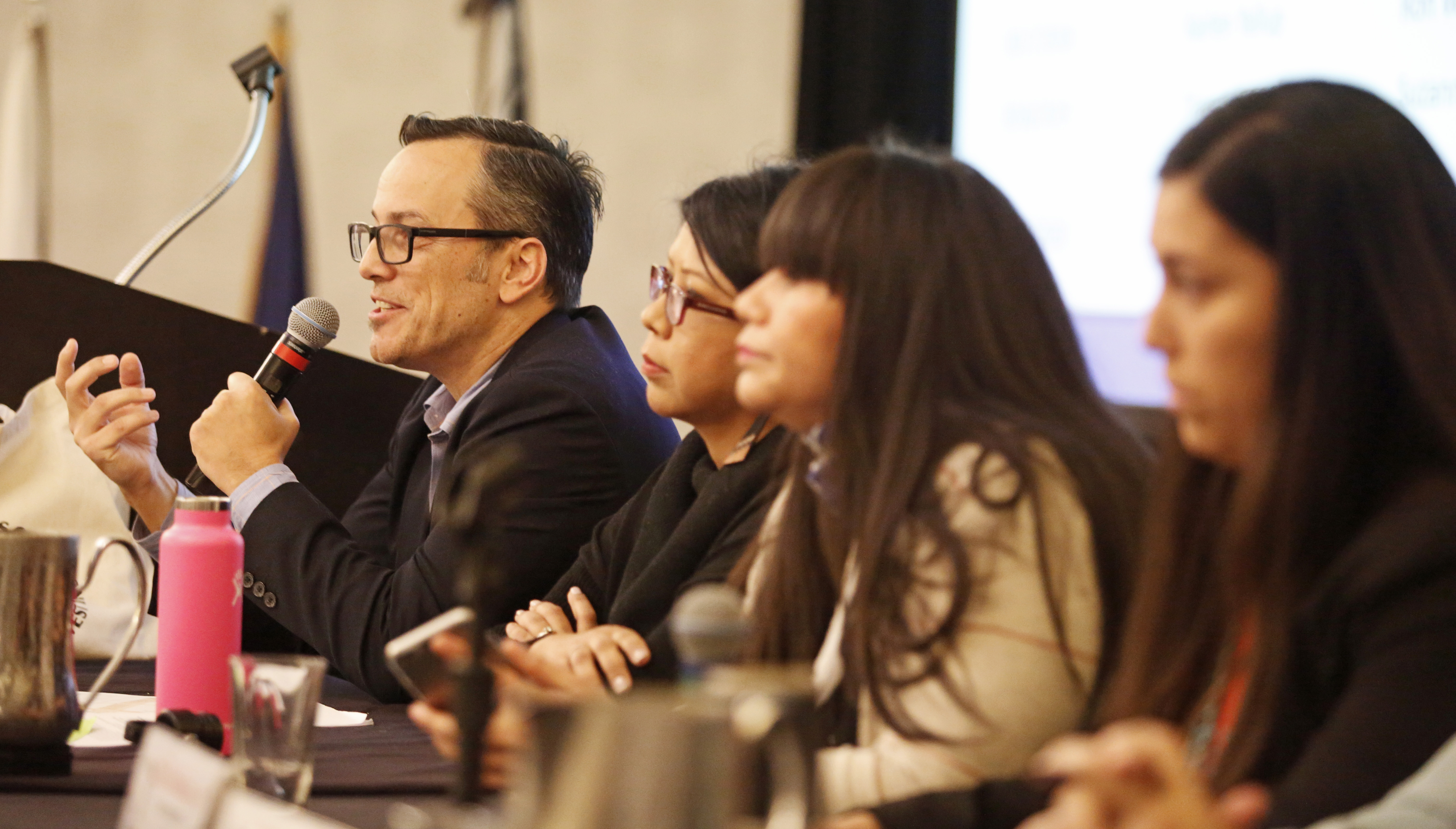 On Wednesday, Jan. 29, Mercier took the podium again as moderator for the Hatfield Fellowship program panel.

The Confederated Tribes of Grand Ronde established the Mark O. Hatfield Fellowship in 1998 as a tribute to honor his accomplishments as an Oregon governor and senator. Each year, Spirit Mountain Community Fund sponsors a Native American to serve as the Hatfield Fellow and intern in a congressional office for eight months.

Placement of the fellow traditionally rotates through the Oregon congressional delegation to enhance the mutual understanding between leadership in Washington, D.C., and Indian Country.

“This program has been extraordinarily successful and a number of fellows have helped pass legislation that is beneficial to Indian Country,” Mercier said. “We want to get the word out to recruit the next cadre of young professionals to fill this role. Also, this program should exist in other states with other Tribes.”

Mercier queried the panelists on topics such as their biggest accomplishments while working in the Capitol, most rewarding aspects of being a fellow and what was memorable.

Answers ranged from helping to pass legislation that directly affected Indian Country, attending the State of the Union address, opening day at the Museum of the American Indian and serving on Capitol Hill immediately after the 9-11 terrorist attacks.

“It was a unique experience to be on the hill right after 9-11,” Shaw said. “You had the creation of Homeland Security, the anthrax scare and a very somber State of the Union. I was told I didn’t have to do the fellowship that year because of everything going on, but I am very appreciative that I did.”

The convention wrapped up on Thursday, Jan. 30, with resolutions that will be forwarded to the National Congress of American Indians for consideration. In addition, Tribal Council Secretary Jon A. George was elected to ATNI’s Executive Board as third vice president, becoming on the only Oregon Tribal delegate on the board.

The NCAI conference will be held at the Oregon Convention Center in Portland from Nov. 8-13, 2020.