Maybe it was the increase in the drum contest prize monies, the mild weather or the Grand Ronde Tribe’s reputation for being good hosts, but the 2019 Contest Powwow was the biggest one in years.

The powwow attracted 392 registered dancers during the weekend of Friday, Aug. 16, through Sunday, Aug. 18, to uyxat Powwow Grounds off Hebo Road, an increase of 55 from 2018 and 103 from 2017. This included 34 Grand Ronde Tribal member dancers.

Powwow Special Event Board Chair Dana Ainam said that there was an increase in contest drum groups, which usually translates into more dancers. Add that to an increase in competition dance specials and the result was a steady uptick of registered dancers who competed in the 28 categories. Dancers ranged in age from 6 to older than 65.

“This is just great,” Ainam said. “It’s such a fun time to see people and always exciting when they come back year after year. To be able to coordinate all of this well feels rewarding.”

Tribal Council Secretary Jon A. George was the master of ceremonies and Tribal Council Chairwoman Cheryle A. Kennedy gave the invocation. 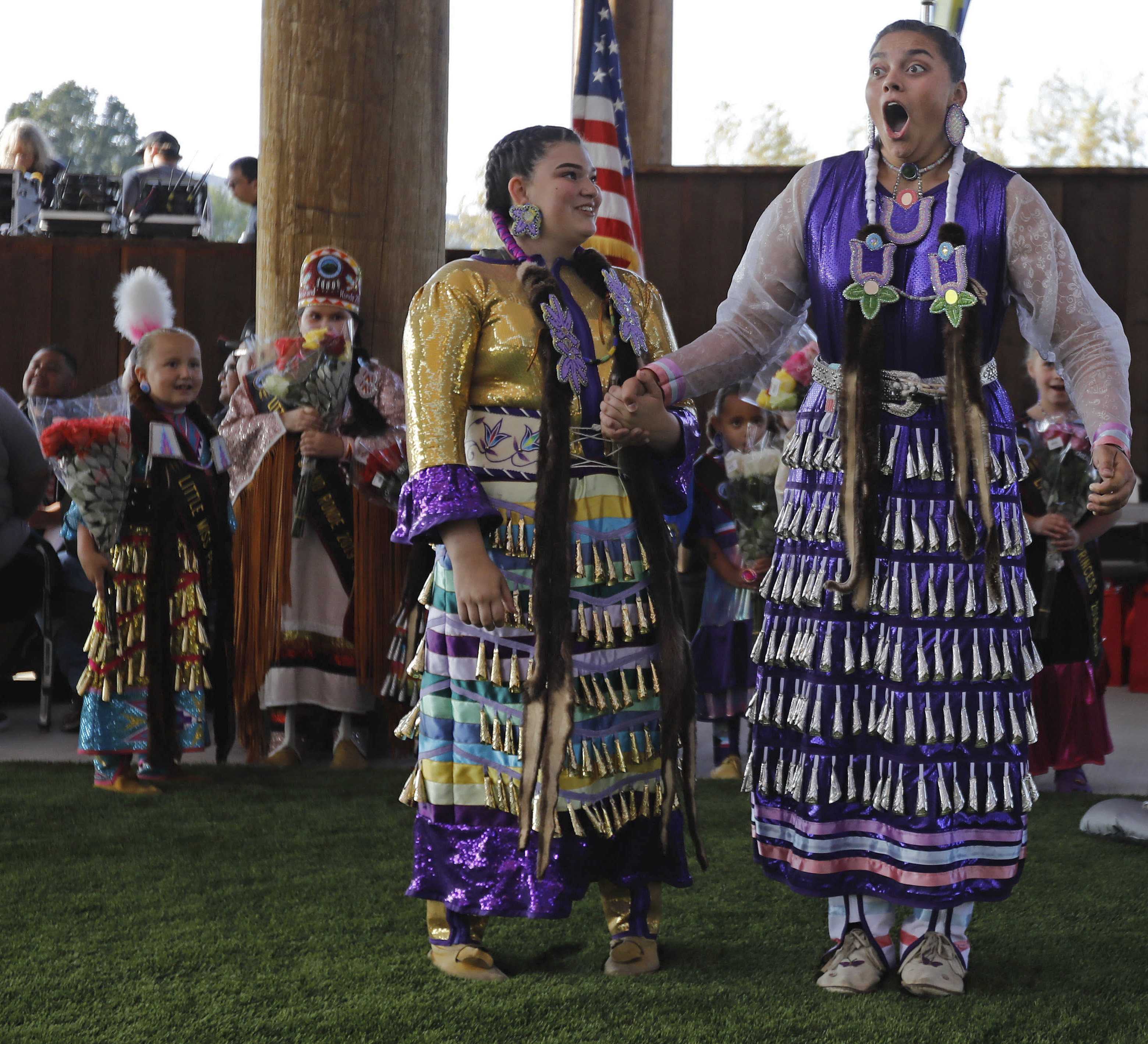 Outgoing Royalty members and their families did one last walk around the arbor while host drum Indian Hill performed an honor song. Incoming Royalty did the same following the coronation.

As Indian Hill pounded out an honor song, Grand Ronde Honor Guard members and Tribal Elders Raymond Petite and Butler, Tribal spouse Richard Vanatta, Tribal spouse Anthony Texeira and Al Miller posted the colors. They were followed by other veterans, including past Tribal Council Chair Reyn Leno and past Tribal Council member Brenda Tuomi. Next came Tribal Council members, Tribal Royalty from various Tribes and Contest Powwow contestants. It took more than 30 minutes for everyone to fill the arbor.

Jon George offered the invocation and Kennedy welcomed attendees who packed the bleachers and filled all of the chairs set up around the arbor, which meant standing room only for later arrivals.

“I’m thankful all of you are able to come here and celebrate with us,” she said. “I want to thank you for being a blessing.”

Kennedy also encouraged attendees to make use of the many recycling containers that were set up throughout the powwow grounds.

“The water is sacred and it is here for us to drink,” Kennedy said. “It gives us life. Do what you can to clean up and recycle. We were the caretakers of this land before and we need to do it again.”

Grand Entry closed with Royalty members of various Tribes introducing themselves and shaking hands with other Royalty members. Then, it was interTribal time, where dancers of all ages and styles came together in the arbor.

Saturday afternoon’s Grand Entry attendance also filled the arbor stands to capacity, as well as rows of extra chairs and bleachers that had been set up.

Grand Entry took approximately 20 minutes to complete. Dancers frequently waved to friends and family, and some attendees used their phone’s video chat function to live stream the action for those unable to attend.

“I thought last night’s Grand Entry was awesome, but looking around and seeing all of this today, I am at a loss for words,” he said. “We want you to have the time of your lives. We’re trying to be good stewards of our land so if you can, please recycle. 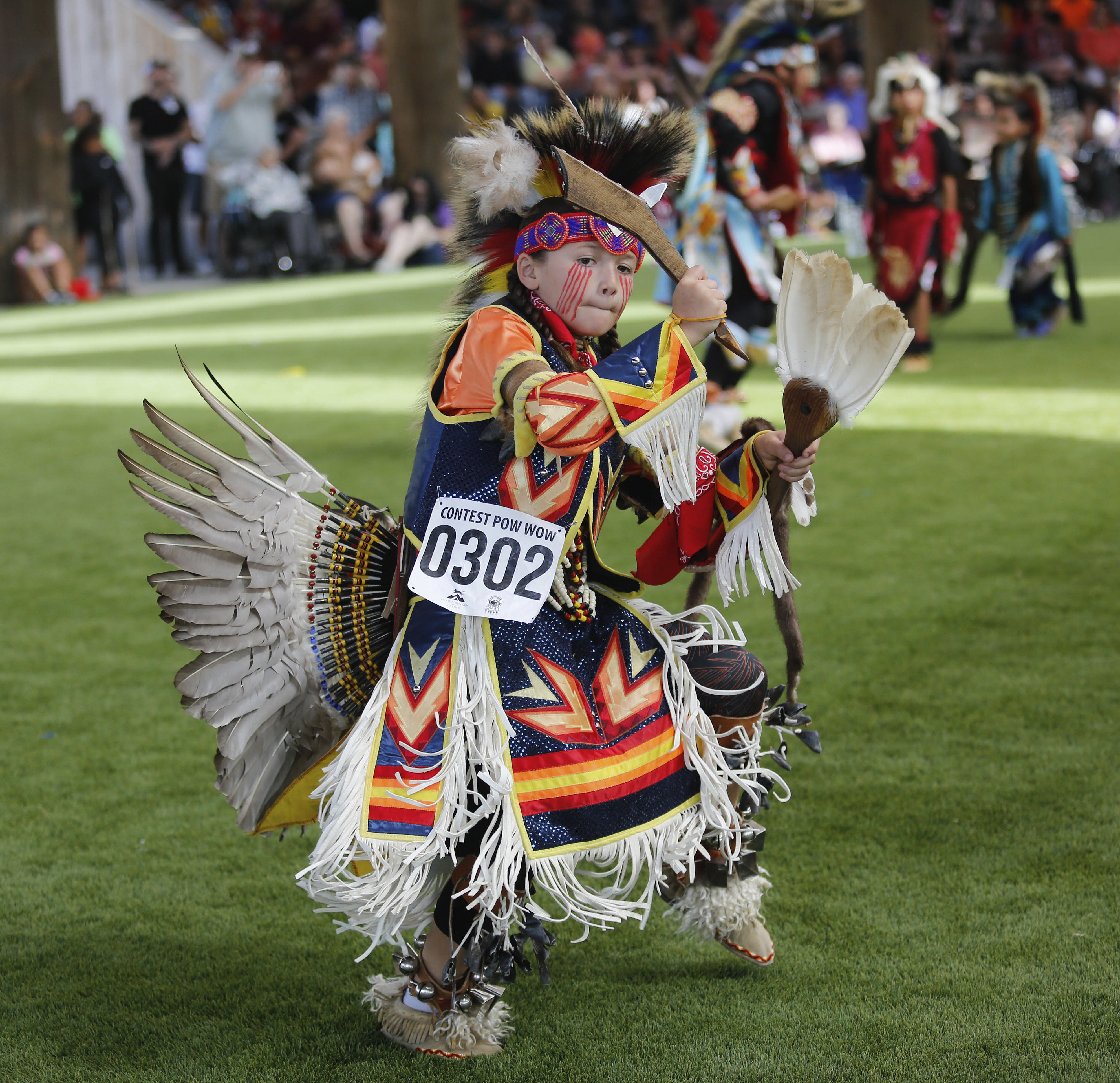 During Grand Entry, veterans also were acknowledged and introduced themselves.

Denelle Stanley of Seattle (Ute/Navajo/Shawnee Creek) has competed at Grand Ronde’s powwow twice before in the Womens Fancy category.

“I like the challenge,” she said. “You really have to keep in shape and have your stamina up in order to remain competitive.”

This year, she was joined by her 6-year-old son Dravus Coin, who was competing for the first time.

“He is pretty excited about it,” she said.

New this year were cultural demonstrations by Tribal member Brian Krehbiel as a part of the Indigenous Project LAUNCH (Linking Actions for Unmet Needs in Children’s Health) initiative to strengthen families through culturally focused and traditional parenting support activities. Surveys and other information were available to families as well.

Next to Krehbiel was a small canoe he built and sailed during this year’s Paddle to Lummi Canoe Journey. It proved to be a hit with younger Tribal members, who kept climbing in and out.

“I’m trying to engage families and see what they want, that’s why I brought all of my goodies,” he said, pointing to a blanket filled with Native baskets, carvings, pine nuts and more. “Anything that people want to learn about, I want to help them.”

Also new to powwow was a booth sponsored by Western Oregon University, the first ever higher education institution invited to a Grand Ronde Contest Powwow.

All Native American students who applied during the powwow had the $60 application fee waived and also are eligible for a $2,000 scholarship if they ultimately enroll in fall 2019 or fall 2020.

Representatives from several departments, including admissions, financial aid and academic advising were onsite to answer any questions parents or potential students might have about navigating the sometimes complex world of the college admissions process.

As of Saturday afternoon, 13 students had applied for admission.

“It’s great we can offer these resources onsite,” said Admissions Counselor Itsel Venegas-Trujillo. “We want students to know we are here and available to help. We understand their circumstances and come from similar backgrounds.”

“We hope this opportunity will help those who attend the event and inspire greater collaboration between Tribes and local colleges to make not only their presence felt in Tribal communities. By working together, we can erase some of the invisibility associated with indigenous peoples in higher education.”

Jackie Dillman (Yakama) of Shawl Lady Crafts has been coming to powwow to sell shawls and regalia for 15 years.

“I have family up here and it is so pretty,” she said. “I spend all year making things to be sure I have stock available for powwows.”

A somber moment came when the Women’s Red Dress Special was held Saturday evening, which honored missing and murdered Indigenous women and girls. Women from age 18 to Elders participated. The family of missing Tribal member Heather Cameron Haller sponsored prize money for the dance and the color red represents the missing and murdered. 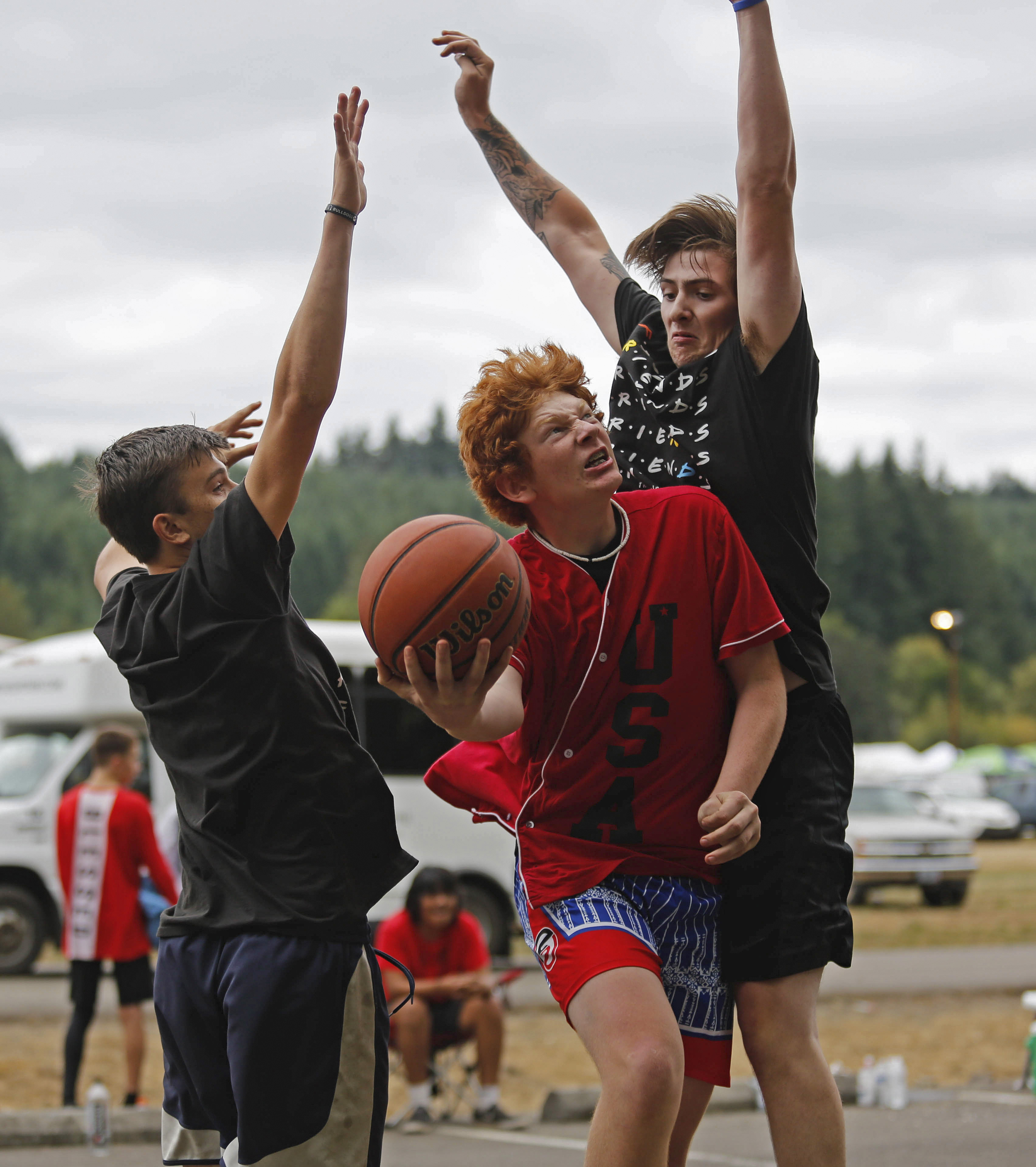 The Contest Powwow included the Recreation Department’s 3-on-3 Native Youth Basketball Tournament, returning for the second year in a row.

There were four teams in each bracket for middle school and high school teams. Approximately 75 friends, family and coaches attended.

“In the middle school bracket the championship game came down to the wire,” Recreation Coordinator Leo Ayala said. “It was competitive games between Little Caesars (The Dalles) against Grand Ronde’s WDL.”

“In the high school bracket, we had some competitive games as well,” Ayala said. “The championship game came down to two local Grand Ronde teams: Wasted Potential vs. Red Roses.”

Wasted Potential came out with the victory by a very slim margin, 29-28. The players were Nick Colton, Austin Watkins, Conrad Farmer and Keyondre Kelley.

Freddy Ayala won the three-point contest, making 12 of his 15 shots for a $30 Nike gift card.

The Contest Powwow continued with grand entries at 7 p.m. Saturday and 1 p.m. Sunday.