Three Restoration leaders will forever stand outside the Tribal Governance Center, overseeing what their years of hard work on Restoration has created.

On Tuesday, July 2, under a misty Oregon sky, the life-sized bronze sculpture of Marvin Kimsey, Margaret Provost and Merle Holmes, titled “Visionaries,” was unveiled before a crowd of Tribal members, employees, family and friends.

Tribal Council Chairwoman Cheryle A. Kennedy couldn’t contain her emotions as she recalled the trials and tribulations to restore the Grand Ronde Tribe.

“All that we see today goes back to the visionary leadership we had in the 1970s,” she said. “We want to celebrate and commemorate that. (Kimsey, Provost and Holmes) put themselves into very uncomfortable situations – in front of TV cameras, legislators, Indian organizations and the local community – to gather support for Restoration. We’re here to show that we love what is happening and to be a part of this is the one of the most excellent things we can do.” 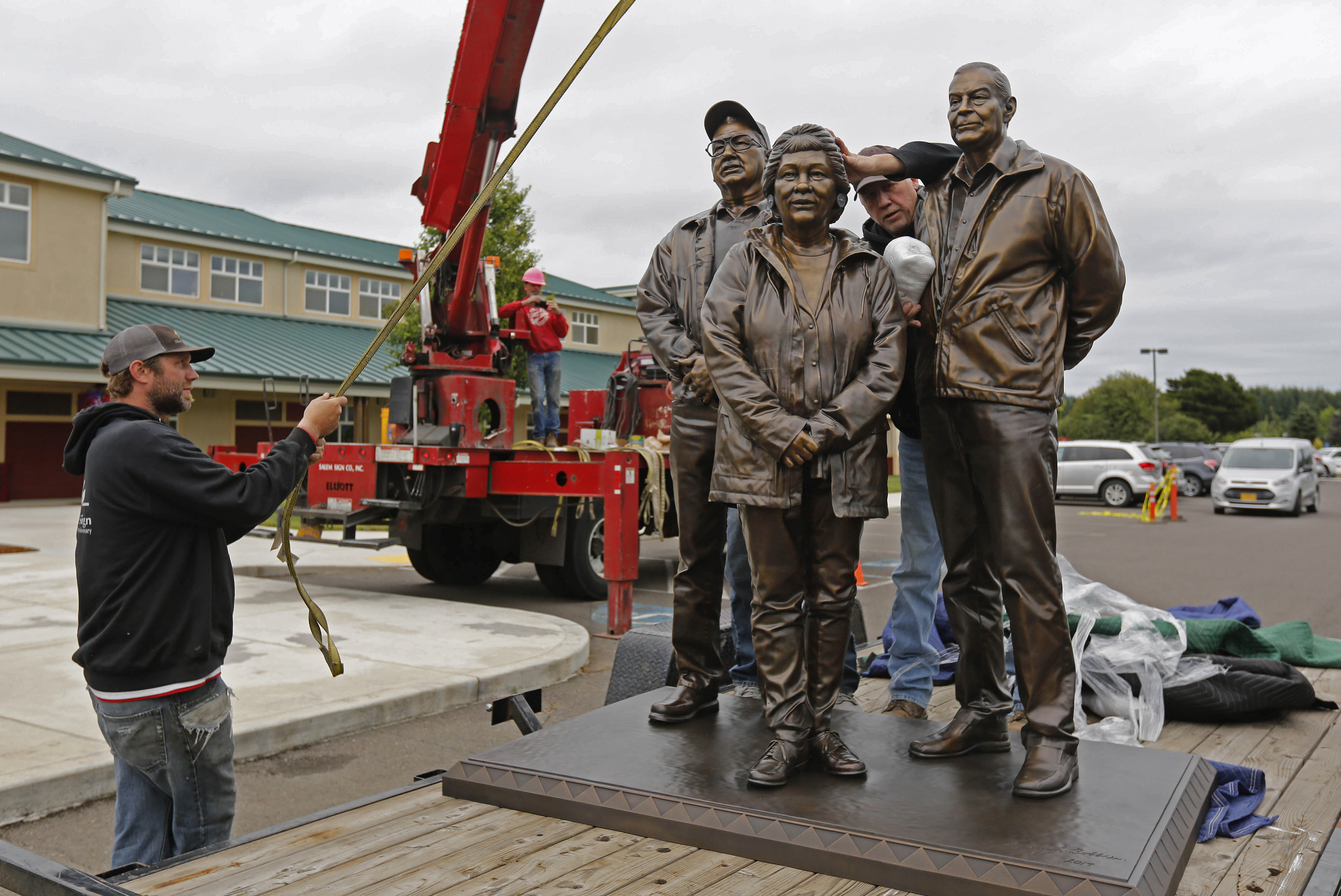 Salem Signs fabricator Mychal Pond and Parks’ Bronze owner Steve Parks prepare the “Visionaries” statue honoring Restoration figures Marvin Kimsey, Margaret Provost and Merle Holmes to be lifted by a crane for its installation in front of the Governance Center on Tuesday, July 2.

The event opened with an invocation by Tribal Council Secretary Jon A. George, who referred to Kimsey, Holmes and Provost as “unsung heroes.”

A long line of Tribal drummers and singers, including children from the Chinuk Immersion Preschool, performed a song as the audience joined in.

“It’s always a journey to go from idea to concept to finished product,” he said. “I am so honored and thank you all for allowing me the opportunity to contribute to this meaningful recognition. It will forever memorialize these three who had a vision that the indigenous people of the Willamette Valley could be recognized for who they are. They put into motion which at the time seemed to be an insurmountable task.”

In the early 1970s, Provost, Kimsey and Holmes began efforts to reverse 1954’s Termination and undertook the arduous task of seeking Restoration as a federally recognized Tribe. After more than a decade of work, the Grand Ronde Restoration Act was signed on Nov. 22, 1983, by President Ronald Reagan.

Provost and Kimsey walked on in 2018 and Holmes walked on in 2004. Their children, Tribal members Jackie Many Hides, Duke Kimsey and Jim Holmes, served as stand-ins for their parents during the 3-D scanning process to create the sculptures.

Bobb’s creation will be his second to be installed on the Tribal campus. The Vietnam War veteran created the West Valley Veterans Memorial, which features a man and woman dressed in traditional regalia reaching toward the sky surrounded by four black pillars represent the four branches of the armed forces – Marine Corps, Army, Navy and Air Force.

Kennedy recalled that she first began thinking of how to memorialize the three Restoration figures a few years ago.

“I thought, we have to remember as Grand Ronde people what it took for us to be a sovereign nation,” she said. “We know the idea and thought was, ‘Never again will this (Termination) happen.’ ”

Bobb said that due to the work of the three visionaries, everyone gathered at the event had benefitted in some way.

“Now, these three will forever stand here and look each day at what they would not have possibility imagined could happen,” he said. “Let us never take for granted the blessing these three have brought to you.”

As a light rain began to fall, Tribal member Ann Lewis walked somberly toward the newly unveiled statue and placed a colorful bouquet of flowers beside it while the notes of a closing drum song hung in the air.

Attendees then went inside the Governance Center to partake of light refreshments.