WEST LINN -- The Grand Ronde Tribe’s annual Fish Ceremony means different things to those who attend, but one common theme is that of connection between Tribal members, fish, the river and community.

On Saturday, May 18, the Tribe held the annual event in a new location, Willamette Park along the banks of the Willamette River in West Linn. In previous years, it had been held at the historic McLean House nearby, but that location proved to be problematic for the number of attendees to find adequate parking.

Turnout was one of biggest of any of the Tribe’s fish ceremonies, with approximately 75 people in attendance.

“It’s a perfect day,” Tribal Council Vice Chair Chris Mercier said. “This is the biggest turnout in a long time. There are lots of people here I don’t normally see, and it’s great they want to know more about how the fish was a staple of our ancestors. … Salmon is integral to all aspects of Tribal life.”

Tribal Elder Debi Anderson, who was beading necklaces at the event, agreed. 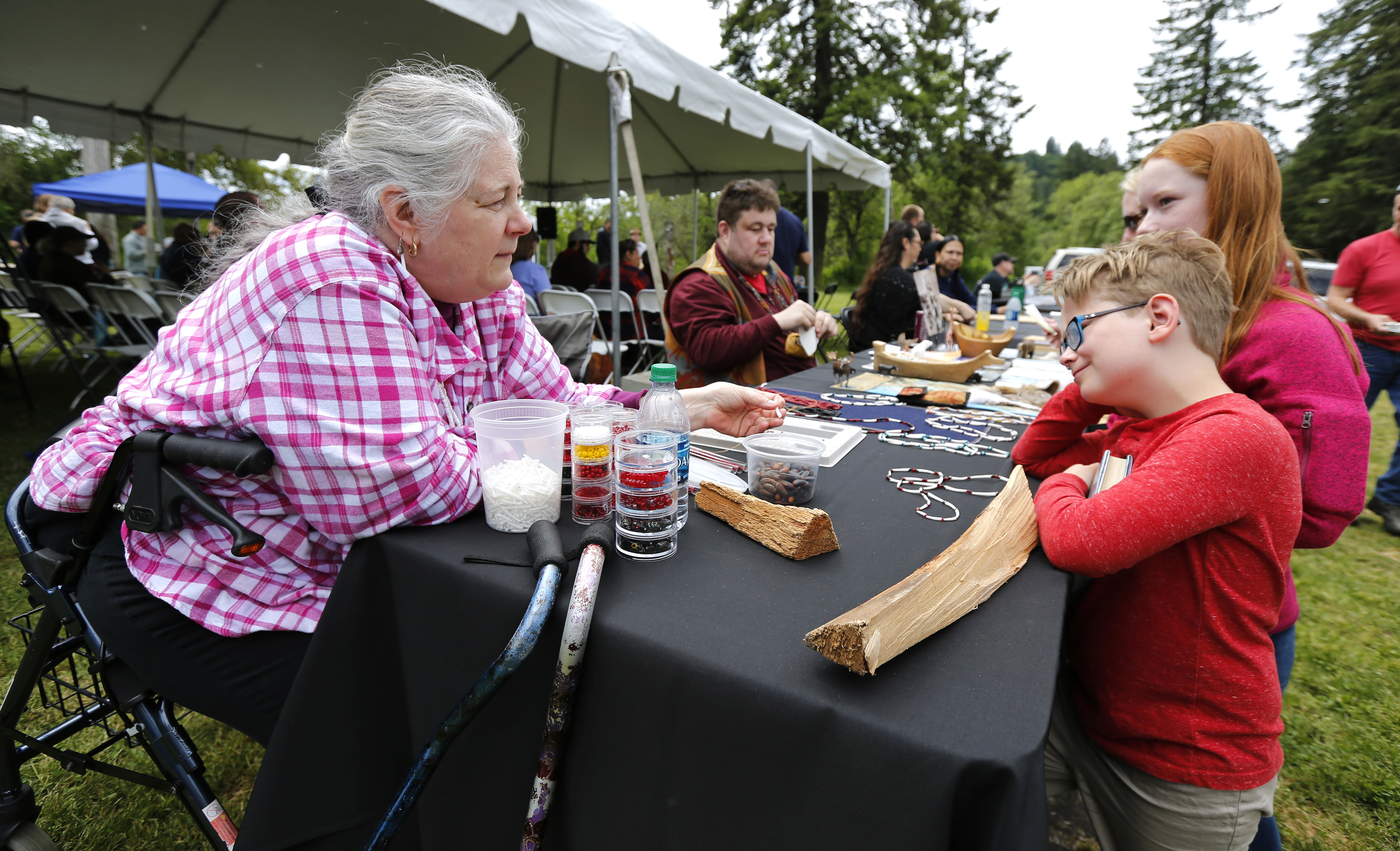 Enrollment Committee Chairwoman Debi Anderson talks with Isaac Brown, 8, and Madeline Brown, 13, at one of the information tables during the Fish Ceremony held at Willamette Park in West Linn on Saturday, May 18. The Tribe celebrated fishing off the platform at Willamette Falls and those who made it possible.

“The turnout is really nice,” she said. “It is one of the largest I’ve seen and it’s good to talk with people who don’t know about our Tribe. I also love that the Elders were brought here from Grand Ronde.”

The fish ceremony was organized by the Tribe’s Cultural Resources Department, with support from Tribal Council staff and Public Affairs.

“This event provides a shared experience with the Tribe’s partners,” Historic Preservation Manager Briece Edwards said. “It’s a chance for people to learn that they are living on the Tribe’s ceded lands. The Tribe is a good host, and part of that is to provide education and a comfortable place to ask questions.” 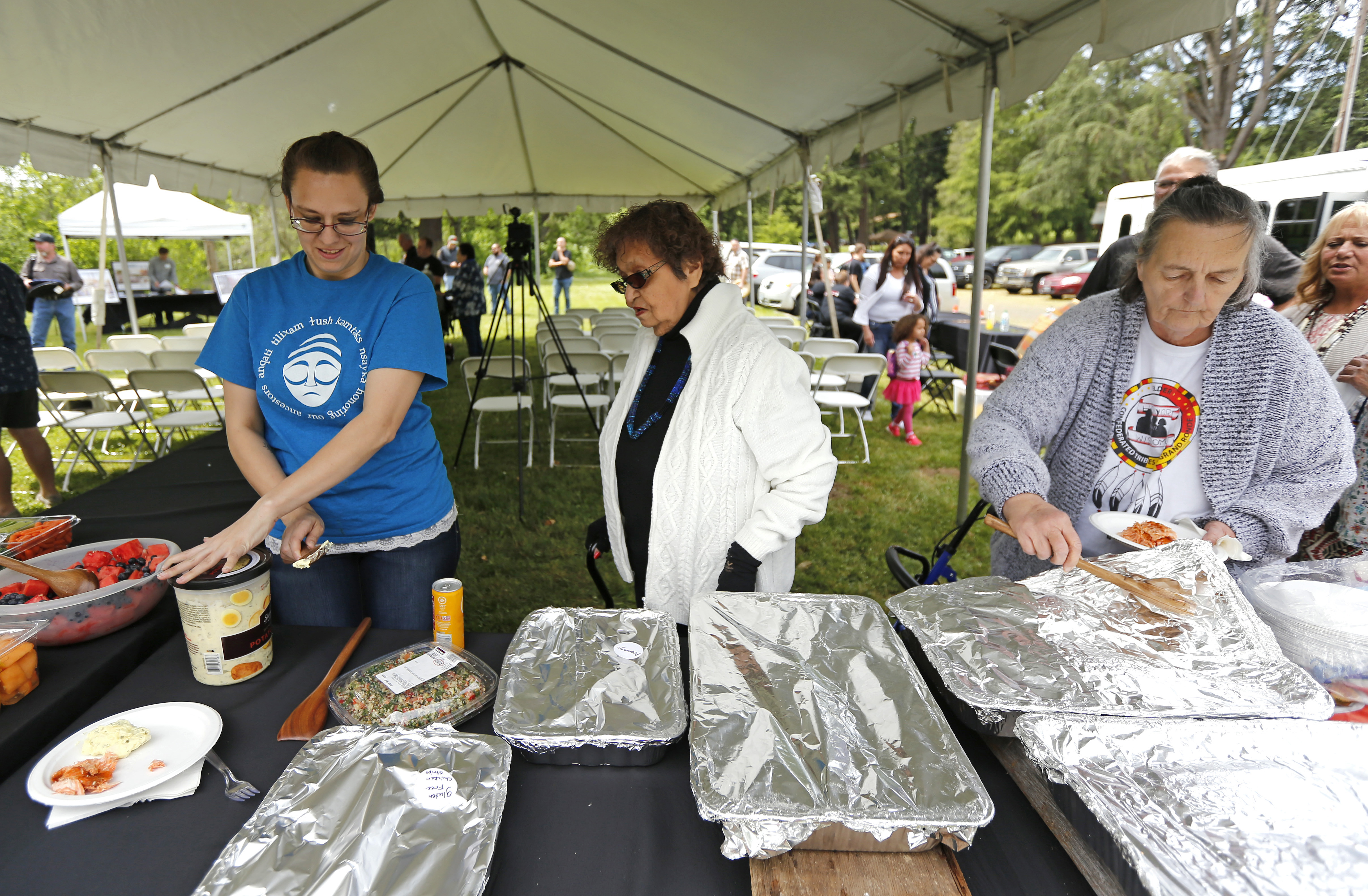 Courtney Ware (Muskogee Creek) helps Tribal Elder Cherie Butler as Tribal Elder Linda LaChance goes through the buffet line during the Fish Ceremony held at Willamette Park in West Linn on Saturday, May 18. The Tribe celebrated fishing off the platform at Willamette Falls and those who made it possible.

Fullerton said he was happy to have worked with several of the partners in attendance, which included city, county and state government officials, and various nonprofit groups.

“Catching the fish in the nets at the falls, it has been an honor to be part of this,” he said. “It’s always exciting.”

Kathleen George said she enjoyed seeing so many Tribal members, friends and partners.

“We are coming together as a community and doing it in the right place, next to the river,” she said. “This is the restoration of a relationship. I see it as coming full circle with the falls.”

Jon A. George echoed those sentiments.

“Willamette Falls is so important to us,” he said. “I have had the opportunity to gather eels, to be able to stand in the river, at the falls and the feeling is so emotional. It’s like our ancestors are there with us. It’s an emotional tie to what our ancestors have done for years.” 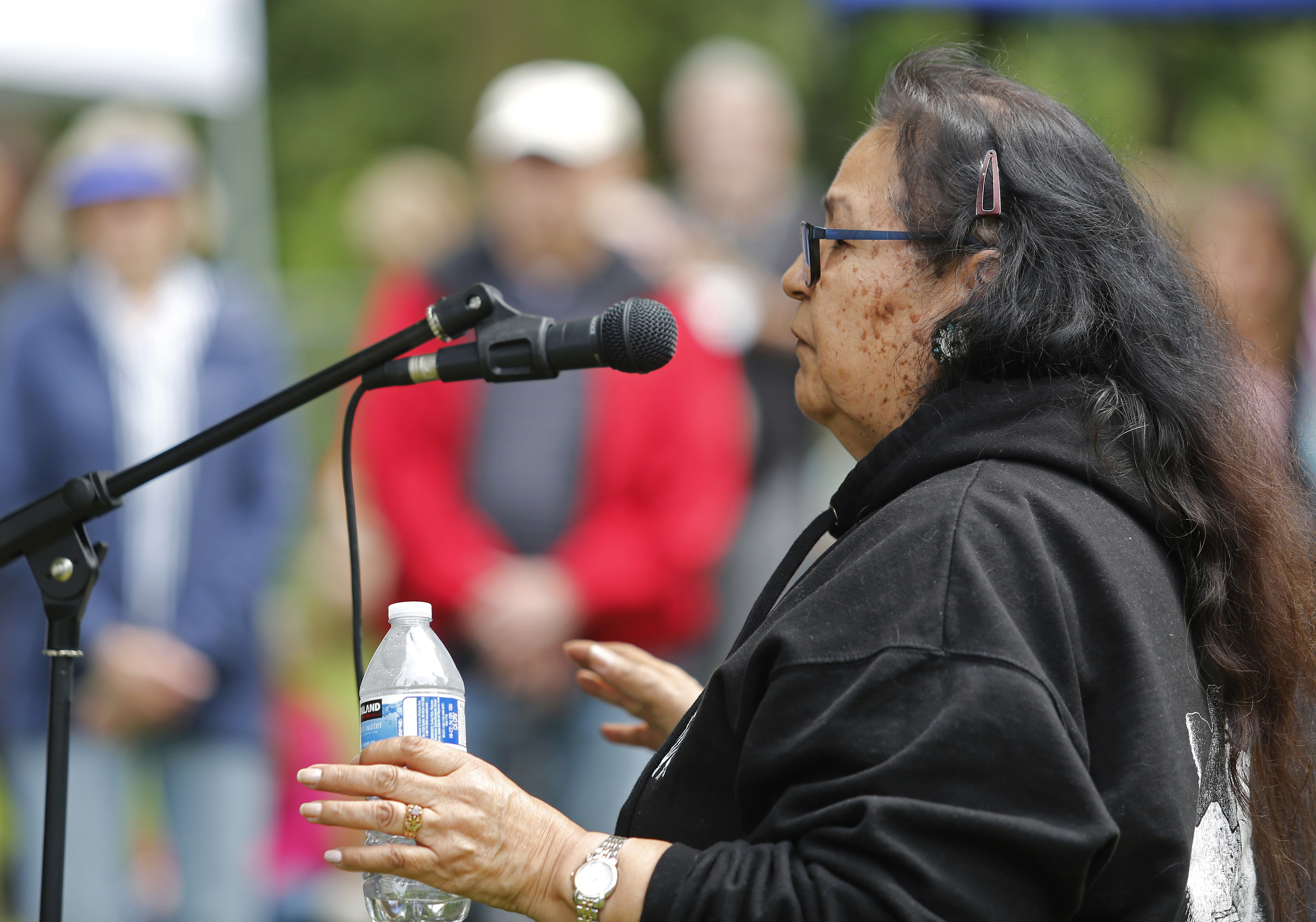 Tribal Council Chairwoman Cheryle A. Kennedy speaks during the Fish Ceremony held at Willamette Park in West Linn on Saturday, May 18. The Tribe celebrated fishing off the platform at Willamette Falls and those who made it possible.

Kennedy said she was glad to share Tribal traditions with the community.

“As a Tribe, Termination had a devastating effect on us,” she said. “Whether it is Oregon or federal legislation, I am struck by how much power is held by a few people. I don’t think that we the people really agreed with that. I think today everyone realized the treaties made with us were a huge real estate deal (for the government).”

Kennedy added that although the government had tried to assimilate Tribal people through policies and confiscating land, the Grand Ronde Tribe’s resilience kept them alive.

“The fish is what fed us,” she said. “We are here today because of what was done then. … I want to thank our Tribal fishermen. Fishing at Willamette Falls is a tremendous undertaking, and all of you who fished are carrying on traditions that are thousands of years old.” 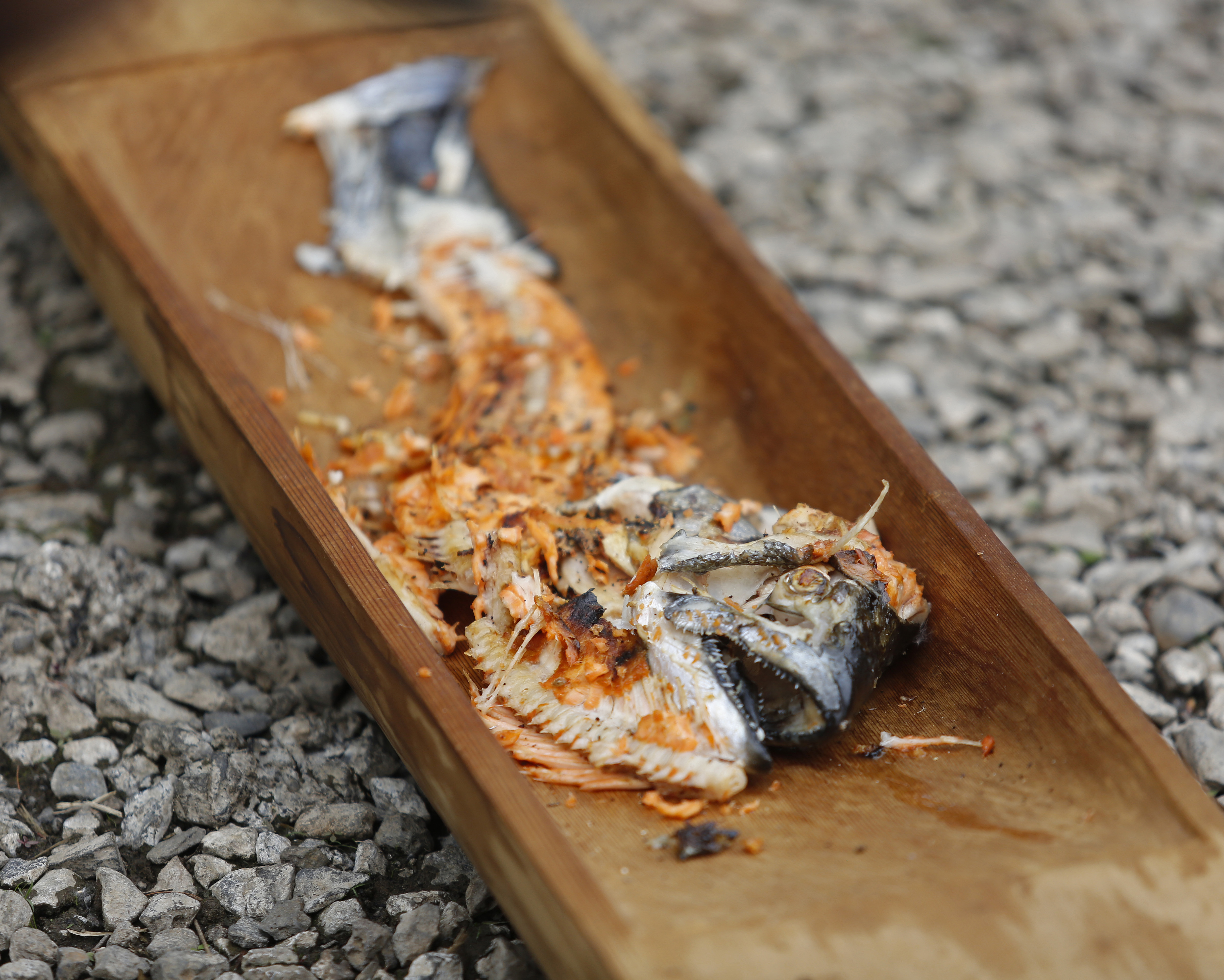 The remains of a salmon waits to be returned to the Willamette River at the end of the Fish Ceremony held at Willamette Park in West Linn on Saturday, May 18. The Tribe celebrated fishing off the platform at Willamette Falls and those who made it possible.

Jordan Mercier said fishing as his ancestors had was a privilege.

“I was honored to be one of the first people five years ago to help conduct the Fish Ceremony,” he said. “We were still going to the ladder back then. It’s an honor to be able to do this the way our ancestors in Oregon City did. It’s nice to be able to gain our rights back.”

Unger said fishing at the falls from the Tribe’s new platform was a “deep honor” in his life.

“It is dangerous and tiring, but always a good feeling afterward,” he said. “It’s a life-changing experience.”

Wilson added that when Grand Ronde went back to the falls to fish, it benefitted everyone.

“It helps with clean water and healthy streams, and fish runs,” he said. “It’s such a great experience.”

“Generally, the first Fish Ceremony is for members of the Tribal community,” he said, referring to the ceremony held in Grand Ronde on May 2. “But we also wanted to have an event for the larger community, and when we think of fishing, this is the most logical place to have it.”

After the speakers were finished, Bobby Mercier invited everyone to walk down to the river, where the fish bones were returned to the waters.

“We have to remember to say thank you to the salmon, so we are not just taking,” he said.

At the banks of the Willamette River, Mercier said a blessing while Kimsey removed the bones out of a cedar cooking tray and placed them in the water. The melodies of the Salmon Song drifted out as the fish remains descended to the bottom of the river.