Tribal member is a top artist in international contest

Grand Ronde Tribal member and Cultural Advisor Bobby Mercier is no stranger to creative undertakings. He has delved into different artistic mediums throughout the years, from Tribal-themed clothing and quilts to intricate metal sculptures and old-growth western red cedar carving.

Recently, Mercier was honored as being one of the top 10 percent of artists in the Respect the Artists international online competition for his head chief carving.

“I had recently finished it as a commissioned piece for a downtown Portland building next to City Hall,” Mercier says. “It was chosen for the lobby area and (afterward), I was contacted by RTA to submit it in their contest.”

The competition is billed as a “mark of recognition to visual artists internationally, who are recognized beyond their creative achievements. They are highlighted by the people and followers who back and support their dreams.”

Mercier joined some 1,400 plus creators from across the globe who submitted pieces ranging from watercolors to multi-media work. Winners are determined by online votes. Mercier’s work garnered 103rd place.

“I was surprised to be in the top 103,” he says. “I was like thinking, ‘That’s pretty cool,’ and got other invitations to submit my work.” 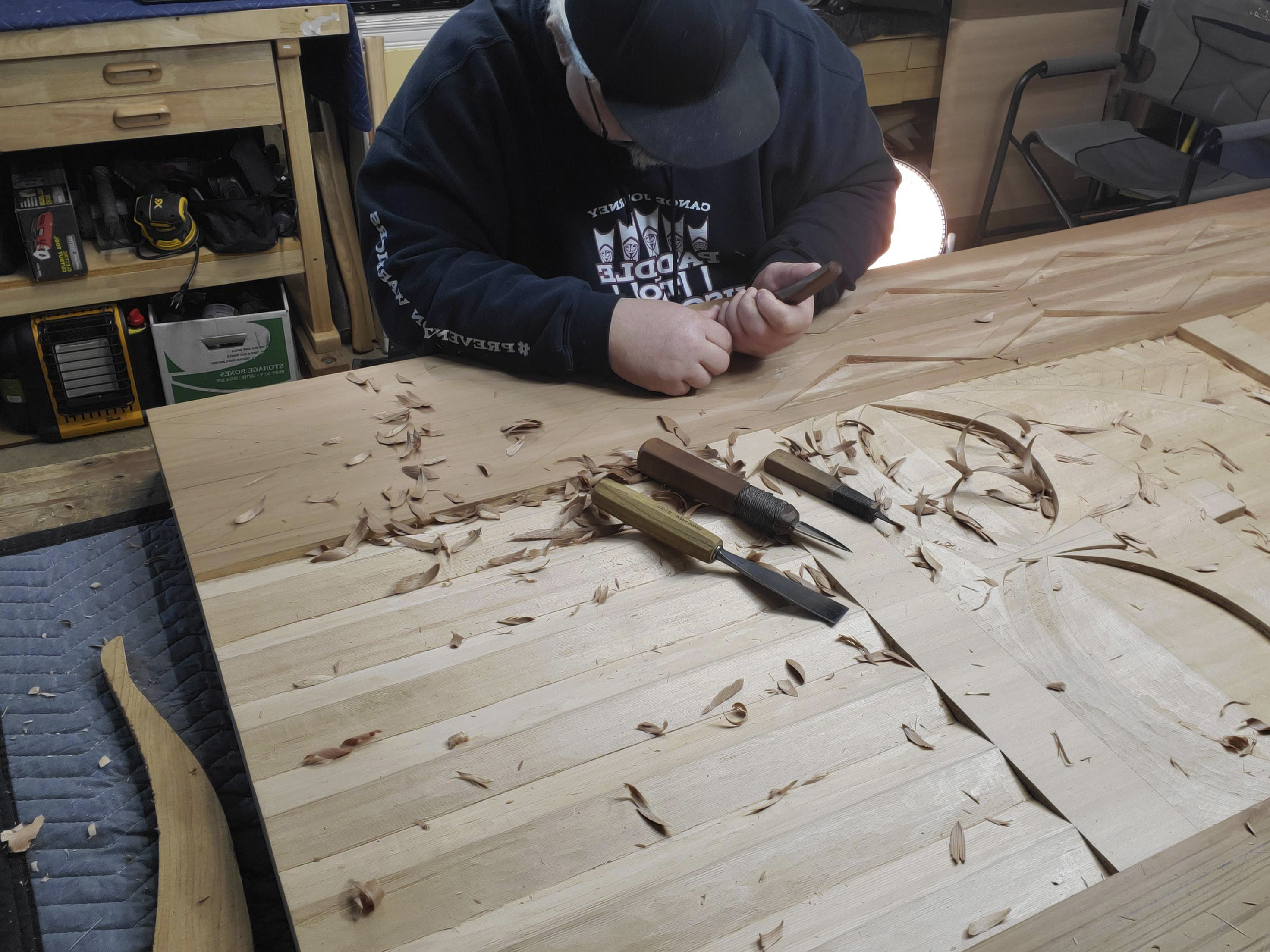 Grand Ronde Tribal member and Cultural Advisor Bobby Mercier took approximately four months to complete his head chief carving, which is more than six feet tall. He used knives and chisels to form the old-growth wood, which is between 800 and 1,300 years old. (Contributed photo)

RTA said it is dedicated to “artist opportunity and excitement.”

“Those are two elements we prioritize in our community,” the website says. “Opportunities, such as buying artwork and donating to causes that uplift local art communities, and excitement, such as our international Respect the Artists awards. … We support artists to authentically create and confidently share freedom of expression through motivation and community.”

The head chief carving, which is more than six feet tall, took approximately four months to complete, with Mercier often burning the midnight oil to finish. He uses knives and chisels to form the old-growth wood, which is between 800 to 1,300 years old.

Mercier has been carving for approximately 18 years and first learned his craft from former Tribal Cultural Education Coordinator Tony Johnson and carver Adam McIsaac, who offered classes through the Tribe’s Cultural Resources Department.

“I really got into carving after that,” he says.

The RTA Awards is a competition and mark of recognition to International Visual Artists, who are recognized beyond their Creative Achievements. They are highlighted by the people who back and support their creativity, resilience, and their dreams!