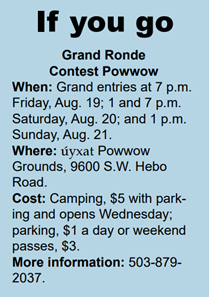 When the Grand Ronde Contest Powwow was last held in 2019, it broke attendance records with 382 registered dancers and thousands of attendees.

After a two-year hiatus due to the COVID-19 pandemic, the Tribe’s biggest powwow is back and organizers are once again expecting large crowds. Powwow Special Event Board Chair Dana Ainam has fielded several phone calls from eager vendors or those who just want more information about the event.

“People are really getting excited for this,” she says. “They are happy to gather again and to come here to Grand Ronde. We’re doing all of the usual preparations and it’s surprising how quickly you get back into gear.”

Powwow weekend will kick off with the Grand Ronde Royalty Pageant at 11 a.m. Friday, Aug. 19, at the Tribal Governance Center. The 2022-23 Royalty Court will officially be crowned later in the day at 5 p.m. at the powwow grounds.

“We haven’t had to make additional plans for that and just recommending that people wear masks if they feel more comfortable doing so and bring hand sanitizer,” she adds.

A solemn aspect of this year’s powwow will be an honoring on Saturday after grand entry for Charles “Charlie” Tailfeathers and Fred Ike Jr., who walked on in 2020 and 2021, respectively. However, a lighter moment of that portion will include an award for the best dressed drum group. There also will be other dance specials during this time as well as a prize for best classic song by a drum group.

Tailfeathers (Cree/Blackfeet) was a fixture at numerous powwows held in Grand Ronde while Ike Jr. (Yakama) served as arena director for many years at the contest powwow.

“We lost two very special people to our community,” Ainam says. “We are making preparations to honor them in the right way.”

A noticeable change for the dancers and powwow attendees will be all the new upgrades to the arbor and powwow grounds.

Besides the upgrades, however, the 2022 Contest Powwow will have a format very similar to years past.

School is Cool, sponsored by the Grand Ronde Education Committee, will be returning as well after Saturday's 1 p.m. Grand Entry. It is open to all students in kindergarten through 12th grade. Regalia is optional and the dance special will celebrate education with three different songs. Prizes include a basket designed towel in red and black created by Tribal member Bobby Mercier, and an all-ages coloring book containing native designs and Chinuk Wawa learning pages by Tribal Librarian Kathy Cole.

"In keeping with education tools for the students, school supplies, an assortment of fidget toys and fidget widgets to boost focus and productivity, logo stickers and bookmarks will also be part of the giveaway," Education Committee Chair Tammy Cook said. "Additionally, the committee was honored to receive assorted necklaces made by Grand Ronde Tribal Elders for giveaways."

Ainam’s advice for a good time at powwow is to remember it is a drug-, alcohol- and weapon-free event, and also to allow enough time for parking and finding a seat in the often-crowded arena.

“Plan to get there early,” she says. “This is not an event you want to arrive late to. I always think making it in time for grand entry is good, too.”

During a Wednesday, July 20, Facebook Live event, Tribal Council member Lisa Leno said she was excited that powwows had come back to Grand Ronde, and urged everyone who attends the contest powwow to be kind.

“We know this powwow will be large and we want to be gracious hosts,” she said. “It’s just a reminder that we always have issues with seating, so please be kind to people and try to work out these situations. We know this will be a large event and the powwow committee has been working hard on it.”