Grand Ronde Firefighter/EMT Erika Alcantar was preparing to go on shift at an August wildfire near Canyonville, Ore., when she got the call that a 15-passenger fire crew van had crashed nearby.

Four of the occupants were in critical condition. Additionally, they were Spanish-speaking and needed someone to translate their medical condition to emergency responders.

Alcantar grew up acting as the family translator for her mostly-Spanish speaking parents, so she quickly sprang into action.

“The driver had fallen asleep and they crashed and rolled the vehicle,” she says. “I did triage as four of them needed to go to the hospital.”

The four critically injured passengers were treated for their injuries and recovered, thanks in part to Alcantar’s ability to communicate their needs during the emergency.

Her lifesaving efforts didn’t go unnoticed and she was nominated for a Meritorious Award in Distinguished Conduct by Oregon Fire Chiefs Association members Trampas Bergstrom and Blake Paulsen. The two are with the Yamhill and Garibaldi fire departments and also served as task force leaders for the summer wildfire crews in Canyonville.

According to the Fire Chiefs Association website, the distinguished conduct award may be granted to a member of the fire service who
“acted with professionalism and efficiency when faced with a specific danger or adversity and who carried out their duties properly despite this danger/adversity.”

Additionally, the action for which the award is earned must go above and beyond when compared to expected emergency responder duties.

“They don’t give those out like candy,” he says. “A recommendation is made and then it gets reviewed, and it was significant enough that they (Oregon Fire Chief Association) focused on Erika’s actions. Ninety percent of patient care is communication and they felt she saved lives that day. These awards are rare, hard to earn and we are very proud of her.”

Warden knew that Alcantar would be honored a few months beforehand and tried to keep it a secret, but eventually logistical issues meant he had to tell her.

She was honored at the Oregon Fire Chiefs Association Annual Conference by President Scott Stanton on Thursday, May 5, in Bend. Warden, as well as Alcantar’s mother and sister, were in attendance.

“I teared up as they read through all of the stuff she had done to help those folks out,” Warden says. “It was a moment where I realized I had made very good decisions on hiring. Erika has been a leader since day one. It was a proud moment.”

Alcantar added receiving the honor was “an amazing feeling.”

“I knew the injured passengers were scared and not sure what was going on,” she says. “I’m glad I could help and it felt really good to represent Grand Ronde with this award. We have come a long way in a short time.”

Alcantar has worked for the Tribe since 2020, starting as a contact tracer.

“We have awesome people working here,” Warden says. “If anything, Erika is a beacon for other folks to follow. We want that kind of excellence and service to the community. It’s been an outstanding experience so far and I hope it will continue to go that way.” 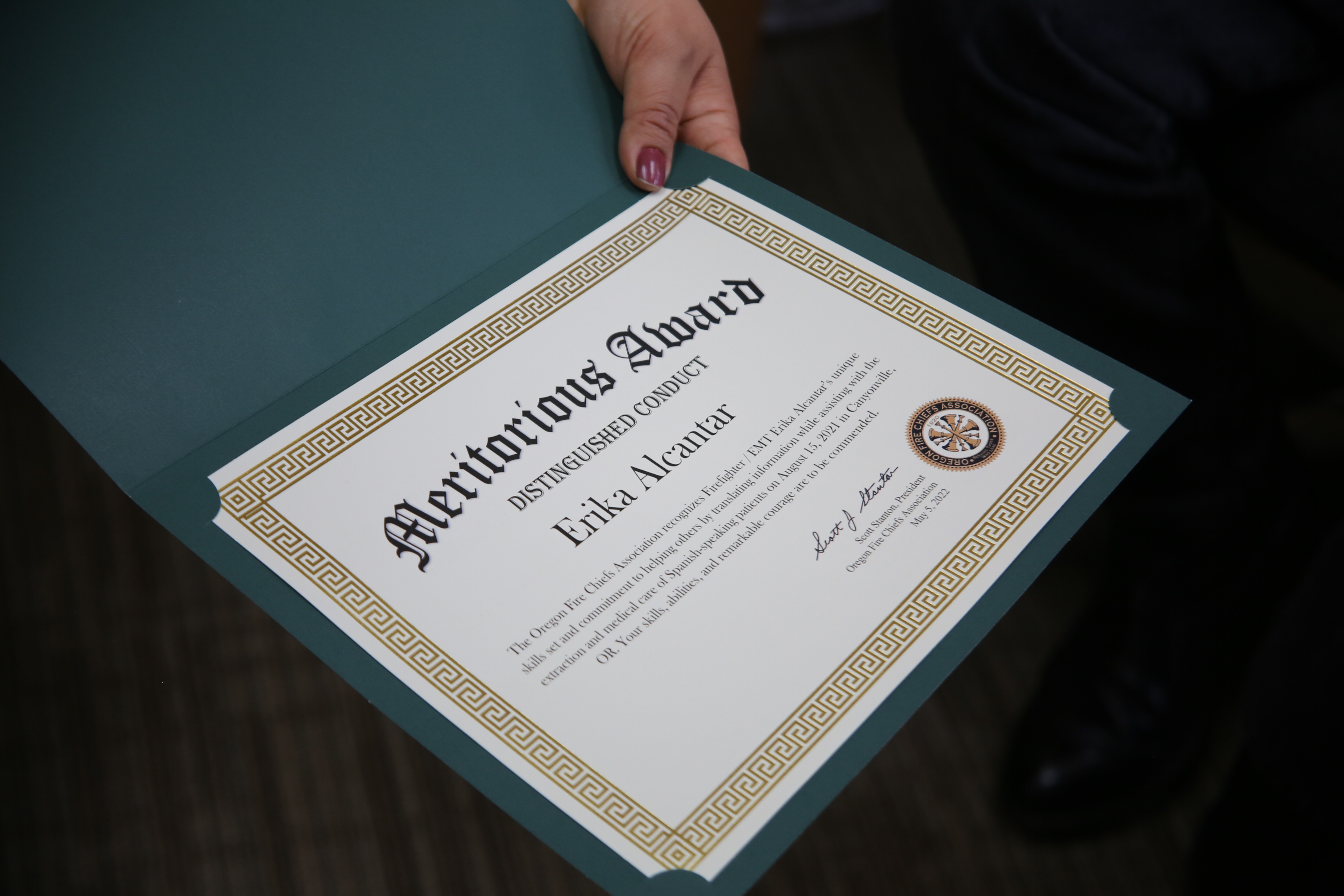 Tribe begins its own fire and emergency services operations