CORVALLIS – Kathryn Jones Harrison Elementary School honors one of the most revered figures in the Grand Ronde Restoration effort in the city where she spent many happy times during her youth.

“I have to say I am a bit overwhelmed and humbled,” Harrison, 98, said as she looked at the audience full of children and teachers. “I’ve been wondering how come I’m living so long … but we all have a plan God sets out for us.”

She smiled and continued, “Now, I can see that you’ll get tired of me coming out here to visit you.”

The Corvallis School District celebrated Harrison during an indoor ceremony at 11:30 a.m., Thursday, May 5. She sat at a decorated table with niece and Tribal member Lisa Watson on one side, and Umatilla Board of Trustees Chair Kathryn Brigham, who is also Harrison’s niece, on the other side.

“This is such as special day,” Noss said. “When our students enter the school we want them to feel known and inspired. When we looked at renaming this school, we looked at certain criteria and Kathryn meets all of those.”

Harrison was a Tribal Council member for 17 years and is also the Tribe’s eldest Elder. She currently lives in the Elk Lodge in the Adult Foster Care facilities in Grand Ronde.

“I’ve known Kathryn for 30 years,” Tribal Council Vice Chair Chris Mercier said. “She is one of those people who inspired me to take a leadership position in our Tribe. … When you have a school named after you, you’ve done something right with your life and career. … As a Tribal Council member, she considered everyone an equal. I don’t know if I’ll ever have a school named after me, but I consider it a great honor to speak about someone as distinguished as Kathryn.”

In addition to Mercier, other Tribal Council members in attendance included Denise Harvey, Lisa Leno, Michael Cherry, Kathleen George and Jon A. George, who also served as master of ceremonies.

“Today is all about Kathryn and the children who will learn under her school,” Jon A. George said. “We’re here today because we all know and love this lady.”

Afterward, Archuleta gave audience members a brief overview of the importance of the Corvallis area to the Tribe.

“Our people have lived in this area since time immemorial,” he said. “Our lifeways included hunting, fishing and baskets made of natural materials from the area.” 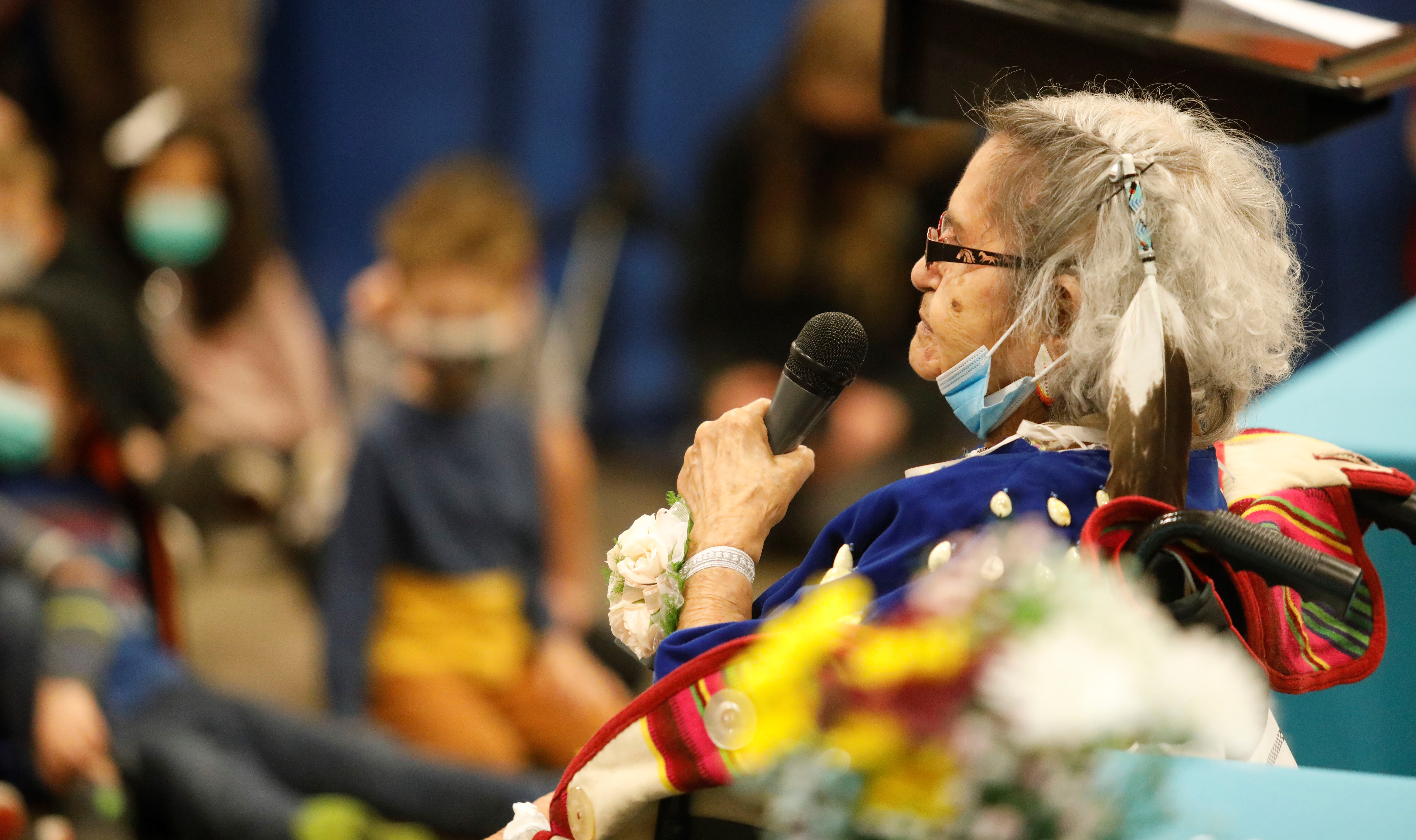 In the summer of 2020, during a time of national racial reckoning, the Corvallis School Board voted to remove the names of former presidents Herbert Hoover, Thomas Jefferson and Woodrow Wilson from elementary schools because the men engaged in racist practices. The schools then temporarily adopted the names of their mascots for the 2020-21 academic year.

In December 2020, the Corvallis School District formed a Renaming Task Force to find new names for Husky, Jaguar and Wildcat elementary schools, and potentially some of the other 14 district-owned buildings.

Harrison’s name was among the top 20 suggestions that the task force considered. The top names also included Chepenefa, which was an indigenous Kalapuyan group that lived in present-day Corvallis; Bessie Coleman, the first known African American and Native American woman to hold a pilot’s license; and Tiacan, a Santiam Kalapuya principal chief.

After the top 20 suggestions were released to the public, the task force received feedback from 150 community members and 187 students returned surveys sent out by Noss.

“There were about four people who received almost unanimous support, and Kathryn was one of them,” Noss said previously to Smoke Signals.

Public comments were most in favor of Harrison, Letitia Carson and Chepenefa while students leaned toward Harrison, Harriet Tubman and John Lewis.

Carson was the only Black woman in Oregon to secure a land claim as a result of the 1862 Homestead Act. Tubman was known for the Underground Railroad abolitionist movement during the Civil War and Lewis was a Georgia politician and one of the original Freedom Riders during the civil rights movement of the early 1960s.

Noss said that in addition to Harrison, he recommended Coleman and Carson as new elementary school names, which were adopted by the School Board in September 2021. Harrison’s name was applied to Jaguar Elementary School.

Harrison was born Kathryn May Jones in 1924 in Corvallis to Harry William Jones and Ella Flemming. Her father was Molalla and her mother Eyak. She attended school in Corvallis before enrolling in Chemawa Indian School in Salem.

She was a key participant in the Grand Ronde Tribe’s early 1980s Restoration efforts and was one of five Tribal members who testified before the U.S. House of Representatives on Oct. 18, 1983, in support of restoring the Tribe to federal recognition. The Tribe’s federal recognition had been Terminated 29 years earlier in 1954.

During her time on Tribal Council, she helped guide the Tribe into gaming through the signing of a compact with Oregon Gov. Barbara Roberts in July 1993. She also suggested the Tribe start endowment funds to benefit education, health care, economic development, and social and cultural programs. Those funds continue to be an important economic resource to this day for the Tribe.

After the renaming ceremony concluded, the Grand Ronde drummers and singers performed an honor song for Harrison. Then, a salmon lunch prepared by Cultural Education Coordinator Jordan Mercier was served to attendees and students.