TROUTDALE – Tribal members Greg Archuleta and Jesse Norton had a great job during the late summer and early fall of 2021.

Between July through mid-October, they were outside and creating an inventory of the Native plants in the Sandy River Delta north of Interstate 84 just east of Troutdale.

Archuleta, who works for the Tribe’s Cultural Resources Department as a cultural policy analyst, conducted the survey as an independent project.

Their inventory report, prepared for the Sandy River Watershed Council, will help guide land use managers in the restoration of the landscape, which includes the area around the Confluence bird blind, said Confluence Project Executive Director Colin Fogarty.

The Sandy River Delta, acquired in 1991 at the mouth of the Sandy River as it enters the Columbia River, is managed by the U.S. Forest Service. The 1,500-acre natural area provides numerous recreational options to the public, including hiking, biking, fishing and horseback riding.

In 2013, a dike was removed from the main channel of the Sandy River to restore the former channel, which provides opportunities for improving salmon and steelhead habitat.

As part of the survey, Indigenous plants, such as wapato, received special focus.

Archuleta found that the wapato population – a widely traded first food of the Chinookan people in the area -- was reduced in one location along the east side of the Sandy River channel that has historic heavy public use by dog owners who bring their pets to play in the area.

“The 2021 summer was an especially hot and dry year, so perhaps, lower water levels and/or a lower water table impacted the wapato,” Archuleta wrote in his report. “Future years will be indicators of wapato survival in this location.”

The news about wapato wasn’t all bad, however. The survey found a much heavier wapato population along the north channel of the Sandy River in an area that has a more moderate use by the public during the summer’s lower water period.

Overall, Archuleta photo tagged 55 locations of wapato in the delta and recommended the locations be monitored to see if the plant populations rebound.

“Testing of the bulbs and soil are important,” he added. “Today, contamination and pollution, diking of the rivers and other conditions have impacted wapato and access to this as a first food for Indigenous people. Testing is needed to be sure the tubers are safe to consume. This is needed of the water, soils and tubers themselves.”

The survey also includes a list of plants recommended for restoration. The list focuses on plants of interest to Tribal peoples for food, utility or medicinal purposes, including camas, tarweed, stinging nettle, western red cedar and thimbleberries.

Archuleta’s survey also recommends establishment of an Elder Use Area near the delta’s parking lot.

“This could include diverse landscapes of open and more covered areas,” he wrote. “A variety of berries could be established, such as blue elderberry, salmonberries, thimbleberries, trailing blackberry, blackcap raspberry, currants, crab apples, choke cherry, etc. The planning for specific areas should be in conjunction with community Elders.”

Archuleta’s report will be a key resource as the Forest Service and other conservation partners at the delta restore the landscape, Fogarty said. 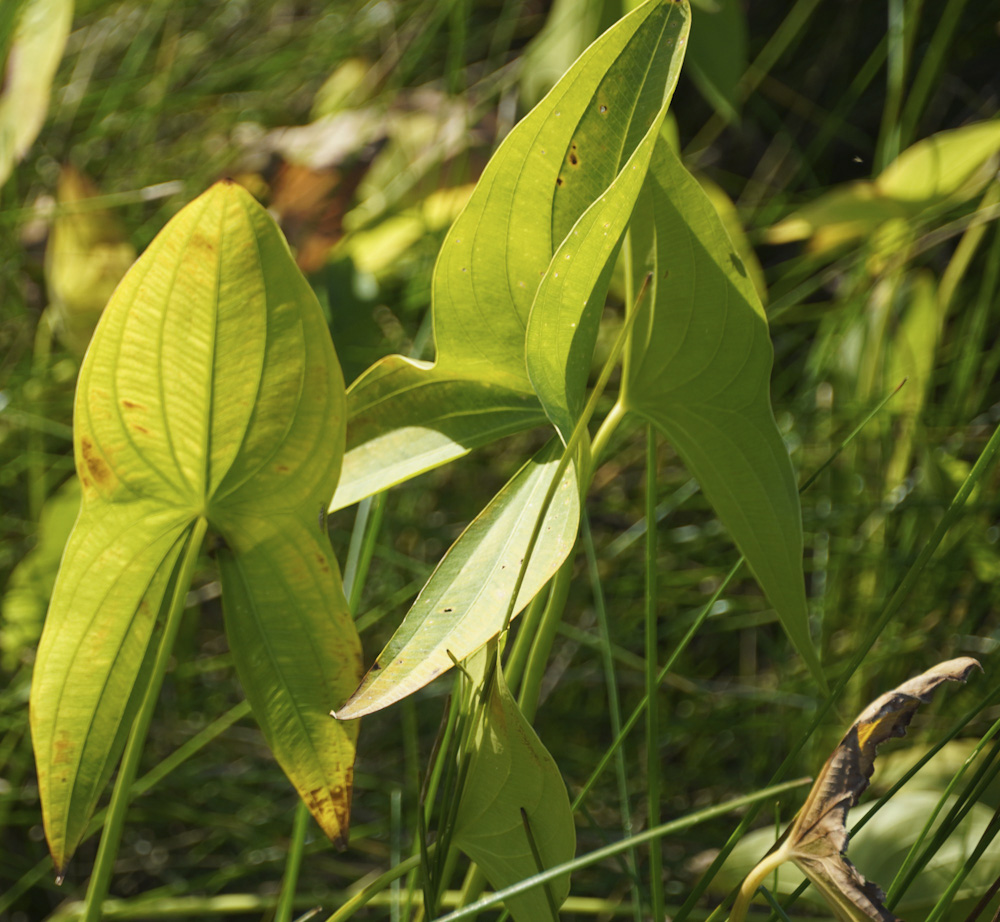 A wapato plant grows in the Sandy River Delta. Wapato was a heavily traded commodity by the Chinookan peoples in the area before white settlers arrived in Oregon. (Contributed photo)